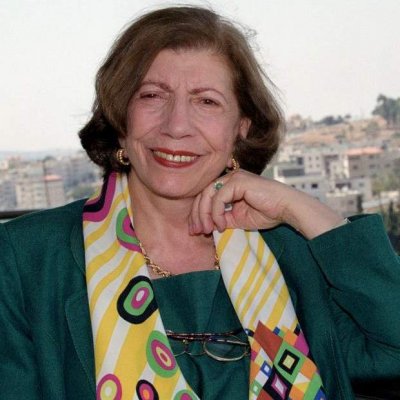 Salma Khadra was born in the Jordanian city of al-Salt on 16 April 1925. She was the firstborn child of a Palestinian father from Safad, Subhi Sa‘id al-Khadra, and a Lebanese mother from Jiba‘ al-Shuf, Anisa Yusuf Salim. She and her husband, Burhan Kamal Jayyusi, had a son, Usama, and two daughters, Lina and May.

Even as a child, she was known for her sharp intelligence. For her elementary school education, she attended the Ma’muniyya School in Jerusalem and the Government School in Acre; her secondary school (high school) education was completed at Schmidt College for Girls in Jerusalem. Her favorite school, however, was her home. Her father was a prominent lawyer who believed that culture was the path to success, and her mother was one of the most cultured women of her generation. The mother would tell her daughter stories of the past and of her grandfather, Yusuf Salim, and of his skill as a physician, his humanitarian attitude, and his readings of great world novels; she recalled delightful winter evenings with the doctor reading these novels to his children. The little girl would grow up, read the same novels, and come to love literature.

Jayyusi studied Arabic and English literature at the American University of Beirut and then returned to Jerusalem where she taught at the Teachers College for Women in Jerusalem.

In 1946 she married Burhan Jayyusi, a Jordanian of Palestinian origin and a fellow student at the university majoring in political science. His first diplomatic post, until 1947, was at the Jordanian consulate in Jerusalem. His later postings included Rome, Madrid, Baghdad, and London. Jayyusi involved herself in the literary scene especially in Baghdad, the capital of Arabic poetry in the fifties, and published her first collection of poetry, Returning from the Dreamy Fountain, in 1960.

In the early sixties the family settled in Beirut. On the literary front at that time, a debate had arisen between two opposing groups of literary figures, each group represented by a literary magazine: the magazine Al-Adab, which was committed to nationalist causes and the Arabic literary heritage though encouraging renewal in poetry; and the magazine Shi‘r, which promoted modernist poetry and modernism in literature and thought and sought to jettison inherited literary values. Jayyusi participated in the ongoing debate and wrote for both magazines. Far from rejecting the prose poem, she wrote positively and in depth about it, though she vehemently rejected the notion that the modernists at Shi‘r magazine had developed the form as much as was possible. She wrote: “This form will one day be considered old since everything is constantly changing.”

She was to emerge as an original poet, a notable critic, and a skillful translator, and she published more than twenty articles on literary issues. Based on her views and research in the sixties, she wrote her doctoral dissertation entitled “Trends and Movements in Modern Arabic Poetry” and was awarded a Ph.D. by the School of Oriental and African Studies of London University in 1970.

Jayyusi then began teaching in Sudan, Algeria, and the United States. In 1973 she was invited by the Middle East Studies Association of North America to go on a lecture tour in the United States and Canada, which included twenty-two universities. These lectures were much appreciated by western academia. The tour helped her realize that the west was ignorant of the Arab intellectual tradition.

In 1977 Jayyusi published her dissertation in English and continued to publish her articles in Arab capitals, including Cairo, Khartum, Tunis, and Kuwait City.

In 1979 Barnard College of Columbia University invited her to deliver the annual general lecture, and the director of Columbia University Press asked her to work with the staff to publish an English-language anthology of modern Arabic literature. That cooperation inspired her in 1980 to launch her own project of translation aimed at presenting Arab culture to the English-speaking world; it was named PROTA (Project of Translation from Arabic) and had involvement from academics at the University of Michigan.

Jayyusi closely followed the progress of PROTA and worked with tens of translators, editors, and researchers in the western and Arab worlds. The project had no official headquarters, and her homes in Boston, London, and Amman (in addition to the hotels where she stayed) served as the project office. In the eighties she began to issue single works of literature in translation, works she herself had chosen from among the most prized literary poetry, short stories, novels, and plays produced by modern and classical Arab writers and poets. The first English anthology that she edited and introduced appeared in 1987 under the title Modern Arabic Poetry: An Anthology, and it included the works of more than ninety poets.

In 1984 she was invited to a conference in Lund, Sweden, where she delivered a lecture entitled “Arabic and Swedish Poetry: Points of Similarity and Difference.” There she met the Swedish poet Östen Sjöstrand, chairman of the art committee at the Alfred Nobel Academy. In spring 1985, the academy invited her to prepare a study about the status of Arabic literature and the possibility of Arab writers’ access to the Nobel Prize and she complied with the request. When Neguib Mahfouz won the Nobel Prize in 1988, the academy invited her to Stockholm to attend the award ceremony in appreciation of her role.

In 1990, Jayyusi launched her second project, East-West Nexus, which aimed to present classical and modern Arab and Islamic culture in English, through comprehensive and specialized academic conferences and studies by Arab and western scholars, in order to combat mistaken or stereotypical views about that culture. This began with a wide-ranging book on Arab Islamic culture in al-Andalus or Muslim Spain, entitled The Legacy of Muslim Spain (1992), which she edited and which was warmly received in academic circles. Similar success greeted her next edited work, Human Rights in Arab Thought: A Reader (2009), which revealed the extent of interest displayed in the Arabic heritage in issues that have to do with human rights long before the west took an interest in the subject.

PROTA and East-West Nexus combined produced more than fifty volumes, eleven of which had an encyclopedic nature.

She delivered tens of lectures and keynote speeches at conferences in many European, North American, and Arab capitals and cities.

She was the recipient of many awards and prizes in recognition of her achievements. A partial list of the awarding bodies includes the PLO (1991); Arab American University Graduates (1996); the Kuwait Ministry of Culture (2002); The Higher Council for Culture in Egypt (2006); the Algerian Ministry of Culture (2007); the King Abdallah bin Abd al-Aziz Prize (2008), and the Ahliyya University in Amman (2009).

The German Arabist Stefan Sperl, professor of Arabic literature at London University, wrote: “I was greatly impressed by her ability to see beyond causes, divisions and claims and to distinguish the true internal voice in a literary text … This exceptional ability to have a multi-faceted sensitivity is at the heart of all her original contributions, rendering her one of the humanists of our times.”

A woman about whom much has been written, she has been called the “doyenne of Arabic literature” and a “cultural institution.”

She lives in Amman.

[Returning from the Dreamy Fountain]

The Humanity of Man by Ralph Barton Perry

Justine and Balthazar, two of the four volumes that make up Lawrence Durrell’s Alexandria Quartet.