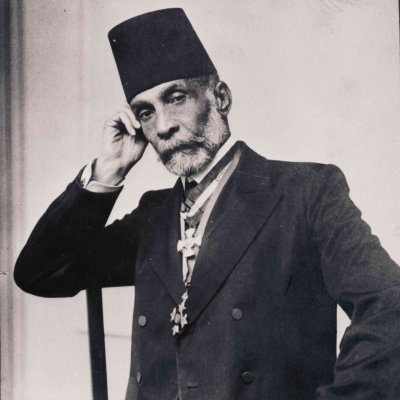 Husseini Becomes Mayor of Jerusalem after the Death of Salim Husseini, his Brother

Husseini Is Promoted to Qa'im Maqam

Husseini Is Promoted to Mutasarrif across the Levant

Husseini Retires and Returns to Jerusalem

Husseini Spends the Four Years of World War I in Jerusalem

Balfour Declaration Is Made

Establishment of the Arab National Fund

General Strike and Demonstrations in Palestine

Musa Kazim Husseini was born in Jerusalem. His father was Salim Husseini, and he had one brother, Hussein Salim. His wife was Zakiyya, and he had three sons: Fuad, Abd al-Qadir, and Farid.

He received his early education in Jerusalem. He then moved to Istanbul to study at the Maktab Sultani, which prepared its students to occupy important posts in the Ottoman administration. His first appointment was in 1880 as a senior clerk (bashkatib) in the Ministry of Health. In 1881, he was promoted to the rank of qa’im maqam and moved between Jaffa, Safad, Harem (Aleppo Province), Acre, and Ajlun.

In 1896 he was promoted to the rank of mutasarrif and posted to Asir, Najd, and Su‘ud (in Arabia), to Bitlis and Arjmidan (in Anatolia), and to Hawran (in Syria) and al-Muntafiq (in Iraq). Eventually he returned to Syria where the Ottoman Sultanate conferred on him the title of Pasha.

In 1913 he retired, returned to Jerusalem, and spent the four years of World War I at home.

Following the British occupation in 1918, he assumed the post of Mayor of Jerusalem, succeeding his brother Hussein Salim. During his period as mayor, he refused the introduction of Hebrew as an official language in the municipality.

In the spring of 1919 he took part in a meeting of Palestinian nationalists in Jerusalem on the eve of the arrival of the American King-Crane Commission in Palestine. At that meeting it was resolved to demand that Syria be given total independence and that Palestine (as part of Syria) be “internally independent” and to reject Zionism, the Jewish national home idea, and the Balfour Declaration.

The British authorities accused him of inciting the Arab-Jewish clashes of April 1920. The British High Commissioner dismissed him from his post and appointed Raghib al-Nashashibi as mayor in his place.

The Third Palestine National Congress held in Haifa in December 1920 chose him as chairman as well as chairman of the Arab Executive Committee, which issued from that Congress. He continued to occupy that position until his death. Under his chairmanship, the Third Congress declared the Balfour Declaration null and void, demanded a stop to Jewish immigration, and called for the formation of a national government responsible to a parliament elected by the people of Palestine, where the rights of the Jewish minority would be respected.

In the summer of 1921, Husseini headed the Arab delegation sent by the Fourth Palestine National Congress (held between 29 May and 4 June 1921) to London to convince the British government to abandon the policy of the Balfour Declaration and to present the question of Palestine to British public opinion. As a result of contacts made by that delegation, the House of Lords rejected (on 20 June 1922) the Instrument of Mandate on Palestine, including the Balfour Declaration, but the House of Commons adopted a resolution (on 4 July 1922) supporting British government policy and the establishment of a Jewish National Home in Palestine. Throughout the 1920s, Husseini headed the Palestinian national delegations that negotiated with British officials.

Following the al-Buraq uprising in August 1929, he once more headed a Palestinian delegation to London in March 1930, in an attempt to convince the British government to moderate its imperialist policies. When these negotiations failed, he stated the following in a telegram sent to the Arab Executive Committee in Jerusalem: “The Arab cause in Palestine will not find a just solution at the hands of the British government which is under Zionist influence.” His words conveyed despair of British government policy and of its willingness to secure the rights of the Arab majority in Palestine.

In September 1932, Husseini oversaw the creation of a project called The National Fund (or The Piaster Project), which aimed at preserving Arab land and preventing it from passing over to Jewish ownership. This fund eventually became the nucleus of a company set up in October of the same year under the name The Arab Company to Save the Lands of Palestine.

At the age of eighty, he led two mass demonstrations, one in Jerusalem on 13 October 1933 and the other in Jaffa on 27 October to protest British Mandate policies and demand a halt to Jewish immigration and to the transfer of Arab land into Jewish hands. At the Jaffa demonstration he fell after being hit on the forehead with a club by a mounted British policeman. He was taken to a hospital.

He died on 26 March 1934, never having fully recovered from the blow he had suffered at the Jaffa demonstration. The people of Palestine bid him farewell in a mass funeral, and he was buried at the Madrasa Khatuniyya near Bab al-Hadid to the west of the Haram, where his son Abd al-Qadir, hero of the al-Qastal battle in 1948, was later buried. Arab newspapers in Palestine and elsewhere eulogized him in obituaries that extolled his achievements, and some foreign newspapers, like the London Daily Express, also carried his obituary.

Musa Kazim Husseini was a nationalist leader and fighter of a virtuous and incorruptible character. He was widely regarded as the venerable father figure of the Palestinian national movement, which opposed the Balfour Declaration and Zionism throughout his years as chairman of the Arab Executive Committee. He stood above party prejudice, believing in a single homeland and a single nation. He won the respect of the entire Palestinian people.