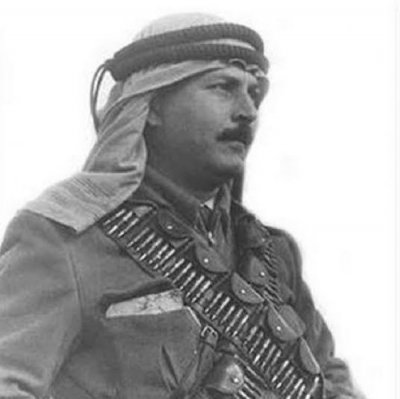 Abd al-Qadir al-Husseini was born in Istanbul. His father was Musa Kazim Pasha al-Husseini, and his mother was Zakiyya al-Husseini. He and his wife, Wajiha al-Husseini, had one daughter, Haifa, and three sons: Musa, Faisal, and Ghazi.

He enrolled in the Science faculty of the American University in Cairo to study mathematics. He was a frequent visitor to the offices of the Shura newspaper published by Muhammad Ali al-Tahir and contributed some articles to it. At his graduation ceremony in 1932 he stood up and accused the university of being a tool of imperialism and was promptly expelled from Egypt.

In early 1933 Husseini returned to Jerusalem to work as an official in the Land Settlement Office; he contributed articles to the al-Jami‘a al-Islamiyya newspaper in Jaffa. When the Palestine Arab Party, which he had joined, issued the Liwa’ newspaper, he joined its editorial board.

Two years later he resigned his official post to work in nationalist activity. He took charge of the Palestine Arab Party’s bureau in Jerusalem and, together with other nationalist youth, began to prepare for an armed revolt in the wake of the Great Palestinian Rebellion of April 1936.

Husseini was one of the founders of the Holy War [al-Jihad al-muqaddas] Organization in the Jerusalem district. When the famous Syrian freedom fighter Sa‘id al-‘As arrived in Palestine with a group of his followers, Husseini fought alongside him in several battles.

In early October 1936, the British army arrested Husseini who was wounded in al-Khudr battle in the Bethlehem district (in which Sa‘id al-‘As was killed). He was put in chains and taken to the Jerusalem Military Hospital but was able to escape to Damascus where he continued his medical treatment.

Husseini returned secretly to Palestine in 1938 to continue the fight when the armed revolution had escalated. In October 1938, he was severely wounded in a major battle between the Palestinian freedom fighters and the British forces in the region of Bani Na‘im (between Bethlehem and Hebron) and was secretly taken to a hospital in Hebron for treatment.

Owing to constant harassment and pursuit by the British military, and shortly before the outbreak of World War II, Husseini moved first to Lebanon and then to Iraq where he joined a special training session for reserve officers in Baghdad, graduating as an officer six months later. He then taught mathematics at the Military Academy (al-Rashid Camp) and also at the Tafayyud Intermediate School in Baghdad.

In April 1941, he participated in the revolt of the nationalist Iraqi officers led by Prime Minister Rashid Ali al-Kailani against the British forces. Following the collapse of the revolt in July of that year, he was arrested and exiled to the town of Zakhu on the frontier with Turkey.

When Palestinian political figure (and opponent of the Iraqi revolt) Fakhri al-Nashashibi* was assassinated in Baghdad, Husseini was brought in for interrogation and imprisoned in al-‘Amara detention camp. The Iraqi government released him at the end of 1943.

King Abdulaziz Ibn Saud invited Husseini to Saudi Arabia because of the friendship between the king and Husseini’s father, Musa Kazim. He remained for two years as the king’s guest during which period he travelled secretly to Germany and spent six weeks in a German military institution where he trained in the manufacture and use of explosives and mines.

In early 1946, Husseini and his family moved to Cairo. The Egyptian government was determined to expel him but relented under pressure from Egyptian nationalists.

In Egypt, Husseini organized operations to buy weapons left over in the western desert where massive battles had taken place during the war and worked to smuggle them into the southern regions of Palestine by way of al-‘Arish and to northern Palestine by way of the Lebanese port of Sidon.

In December 1947, Husseini slipped back into Palestine through the Egyptian border. When the Arab Higher Committee announced the jihad following the UN Partition Resolution, Husseini reformed the Army of the Holy War [Jaysh al-jihad al-muqaddas] and was chosen to command them. Under his command these forces achieved a number of significant victories against the Zionists forces in Jerusalem and nearby settlements and in lines of communications leading to them. The explosives unit in these forces carried out a number of major operations, the most notable of which was the blowing up of the Jewish Agency building in Jerusalem, the hub of Zionist activity in the city.

At the end of March 1948, Husseini travelled to Damascus to contact the Military Committee of the Arab League, which was in charge of the fighting in Palestine. He wanted the committee to supply him with arms equal to what the Zionists possessed in order to defend Jerusalem. While in the Syrian capital he heard the news that a major Zionist attack had been launched against Jerusalem; the attackers had succeeded in occupying the village of al-Qastal, a highly strategic position overlooking the main road between Jerusalem and Jaffa.

Husseini returned from Damascus deeply disappointed, having failed in his mission to the Military Committee, and headed directly to the field where he led a desperate counter-attack to recover the village of al-Qastal; he was killed in battle on 8 April 1948.

In a eulogy, the Arab Higher Committee referred to him as “a great and heroic commander who has gallantly led the battles of jihad in defense of Palestine ever since the year 1936.” Newspapers throughout the Arab world eulogized him while the Jewish public was delighted by his death. His funeral was attended by massive crowds and he was buried in the vicinity of the Noble Sanctuary (Haram al-Sharif) in Jerusalem next to his father Musa Kazim.

Abd al-Qadir al-Husseini was a model patriot in his love of his homeland and was the most prominent Palestinian field commander in guerrilla war, the most experienced, and the most effective. He won the absolute love of his fellow freedom fighters for his decency, high-mindedness, courage, and honesty.

* Fakhri al-Nashashibi was a Palestinian politician from Jerusalem and one of the most vigorous opponents of the Higher Arab Committee led by Haj Amin al-Husseini. He was accused of collaboration with Zionist and British leaders against the Iraqi revolt and was assassinated in Baghdad in 1941 by an unknown gunman while on a visit to Iraq.