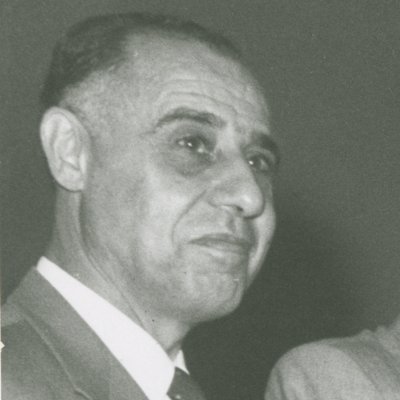 Izzat Tannous was born in 1894 in Nablus into a Christian family. His father was Jiryes Tannous. He had one brother, Suleiman, and one sister, Lydia. He had three children: Raja, Farid and Layla.

When he was five years old, his father died, and so his mother took care of the family. In 1906, she sent him to school in Jerusalem riding a pack animal because modern means of transport were not available at the time. The journey took one and a half days. He was admitted to St. George’s School, from which he graduated in 1911. He was an excellent football player and won the school’s gold medal for athletics. He taught mathematics at St. George’s for three years and then went to Beirut, where in the autumn of 1914 he enrolled in the Faculty of Medicine at the Syrian Protestant College (which later became known as the American University of Beirut). There too, he played football, eventually becoming captain of the medical school’s football team and then of the universitywide team.

After graduating as a doctor, Tannous was enlisted in the Ottoman army in Damascus in July 1918. He was appointed in a hospital in Haifa and continued to work in it for several weeks after the British occupied the city at the end of September. In 1919, he returned to Jerusalem and worked at a health center affiliated with the American Red Cross and then opened his own clinic. Driven by his love for children, he went to London in 1928 to specialize in pediatrics at the medical college at the University of London. After completing his residency, he returned to Jerusalem in the summer of 1929 as a pediatrician and achieved spectacular success. Sick children from all over Palestine flocked in droves to his clinic.

Shortly after Dr. Tannous returned to Palestine, the al-Buraq Uprising broke out, lasting from 15 to 29 August. Palestinian leaders and the Zionist movement traded accusations about who bore responsibility for the bloody events. The Arab Executive Committee, which had been elected by the seventh Palestinian National Congress, launched a media campaign at the headquarters of the Supreme Muslim Council, which included drafting press communiqués and interviews with foreign journalists. Dr. Tannous decided to close his clinic to devote himself to this political work full-time for one month. In the fall of 1933, he participated in the mass demonstrations in Palestinian cities, especially Jaffa and Jerusalem, to protest growing Jewish immigration. He was a member of the delegation that met with the British High Commissioner to protest the Mandate authorities’ harsh repression of the demonstrators.

Dr. Tannous grew closer to the Palestine Arab Party after it was founded in March 1935. In June 1936, two months after the general strike was declared, he accompanied Jamal al-Husseini, Shibli al-Jamal, and Emil al-Ghouri to London to meet with the British secretary of state for the colonies and hold talks with him on halting Jewish immigration to Palestine, as well as to meet members of parliament, members of the press, and other figures to explain to them the extent of the injustices that Britain had inflicted on the Palestinian people. While in London, he published a pamphlet entitled The Palestine Case and advocated for the creation of a parliamentary committee to support the Palestinian cause. He also supervised the establishment in London of the Arab Center, whose mission was to explain the issue of Palestine to the British public.

Dr. Tannous was among the Palestinian Arab representatives who met with the Royal Peel Commission in autumn 1936, which was investigating the events of the Palestinian uprising. Then, in early 1937, he returned to London to head the Arab Center. In the spring of 1937, the Arab Higher Committee (AHC) tasked him with going to the United States to make contact with Palestinian and Arab immigrants there and to mobilize them to support the Palestinian cause. He went there on 10 June, and the Arab National League, which operated out of New York, arranged meetings for him in New York, Washington, Boston, Detroit, Chicago, and other cities. In New York, the famous Lebanese writer and philosopher Amin Rihani, who was on a visit to the city, joined him in the functions held there.

Then, in the fall of 1937, the AHC sent him to Geneva as the secretary of the Palestinian Arab delegation that went to the League of Nations during its discussion of the Palestine issue and asked him to meet with its Mandates Commission. The delegation was made up of Jamal al-Husseini, Alfred Roch, Awni Abd al-Hadi, Musa Alami, and Emir Adel Arslan. The Palestinian delegation met several times with the Mandates Commission to ascertain whether Palestine was on its way to self-rule according to the text of the Mandate; it was made clear to the delegation that the commission could not give any help to the Palestinian Arab people because Britain objected to it.

Dr. Tannous returned to London to continue his work at the Arab Center. He then joined up with the mufti, Haj Amin al-Husseini, who had sought refuge in Lebanon in October 1937 after the British authorities banned the AHC. From Beirut, Dr. Tannous moved back to Jerusalem, where he held talks with the British High Commissioner, Arthur Wauchope, and with the president of Hebrew University, Yehuda Magnus. Back in London, he contacted the new British Colonial Secretary, Malcolm MacDonald; the two met for the first time on 20 June 1938. A week after their meeting, Tannous sent him a memorandum in which he presented the Arabs’ position: the only solution was “for all Palestinians to have equal civil and political rights, regardless of gender or religion, and the establishment of a national unity government in which all sectors of the people would be represented in proportion to their number, while guaranteeing the preservation of the rights of minorities. This government would also guarantee Britain’s legitimate interests, and form an alliance between Palestine and England similar to one between the latter and Iraq.”

The British government announced its intention to hold a conference in London on the question of Palestine, in which the AHC and the Jewish Agency would both participate separately. In response, Dr. Tannous suggested to MacDonald that the Arab governments also take part in that conference, and the British government agreed. The conference was convened in February 1939 at St. James's Palace in London. It was inaugurated by the British Prime Minister and remained in session for three months. Tannous attended the conference; the Arab Center in London had prepared all the necessary documents, studies, and data for the conference and provided them to the Palestinian Arab delegation.

In May 1939, the British government issued the MacDonald White Paper, which placed restrictions on Jewish immigration to Palestine; it permitted the entry of 75,000 Jewish immigrants over the next five years. It also placed restrictions on the sale of land to Jews and adopted the idea of establishing self-rule for Palestine where Arabs and Jews would be represented in proportion to their respective populations; meanwhile the country would assume full independence within a period of ten years. The Zionists rejected the White Paper outright; the AHC members who were meeting in Beirut unanimously approved it, with the exception of Haj Amin al-Husseini, the committee chairman. Dr. Tannous was among those who called for accepting it.

After World War II broke out, Dr. Tannous returned to Jerusalem and reopened his clinic. Then, in June 1945, the Arab League asked him to go to London to establish a liaison office for it whose goal would be to engage in advocacy for Arab causes, especially the Palestinian cause. Dr. Tannous enthusiastically accepted the offer and headed to London, where he set up a small office and began work there in earnest.

However, after spending just five months in London working in the Arab Office, he had to go to Beirut; his wife had been under treatment there, and she passed away. From Beirut he moved back to Jerusalem. In November 1945, he joined the newly revived AHC and was appointed both its secretary and treasurer. The committee made his private office its bureau of affairs. In February 1946, when Jamal al-Husseini returned from exile in Rhodesia, the committee members asked him to take over as chairman, and he did so.

The Arab League decided to establish a new Arab Higher Committee (Hay’a) to replace the AHC (Lajna) headed by Amin al-Husseini, who had managed to escape from detention in France to Cairo. Dr. Tannous was tasked with being General Secretary of the bayt al-mal or treasury fund that the new AHC created. He formed a committee of financial experts and businessmen under whose guidance and instructions this fund would operate and then opened offices for it in Jerusalem, Jaffa, Haifa, Nablus, Gaza, and Nazareth, each of which had a manager, an accountant, and a collector.

The UN resolution to partition Palestine was passed on 29 November 1947, and fighting between Arabs and Jews broke out. Dr. Tannous, Ahmad Hilmi Pasha Abd al-Baqi, and Rouhi al-Khatib were among the few who remained in Jerusalem. They worked on fortifying the defenses of the neighborhoods of the Old City. As the General Secretary of the AHC treasury, Dr. Tannous oversaw the financing of the national committees and armed groups, including the militia commanded by Abd al-Qadir al-Husseini, who was killed in the battle of al-Qastal on 8 April 1948, and the one led by Ibrahim Abu Dayya, who was wounded in the battle of Ramat Rahel south of Jerusalem on 20 May.

Dr. Tannous's nationalist activism continued after the Nakba. He set up an Arab Palestine Office in Beirut, and in 1951 he traveled to Paris to participate in the United Nations General Assembly; he addressed its Special Political Committee on behalf of the Palestinian people. Then, in 1952, he traveled to New York to speak again on behalf of the Palestinian people. In New York, he founded the Palestine Arab Refugee Office (PARO), which received financial support from Iraq. However after the revolution of 1958, the support of the Iraqi government was halted and Dr. Tannous was forced to shut down the office in 1962.

Dr. Tannous participated in the Palestine National Congress held in Jerusalem in May 1964, from which the Palestine Liberation Organization (PLO) emerged. The PLO then nominated him to open an office for it in New York. In January 1965, he registered the PLO with the US Department of Justice in accordance with the Foreign Agents Registration Act and opened the office in March under the name “The Permanent Delegation of the PLO.” Dr. Tannous headed the office until October 1968 and went back to Beirut where he retired from politics and media work and devoted himself to writing his memoirs. He died in Arlington, Virginia in 1993.

Izzat Tannous was one of the first Palestinian doctors and one of the Palestinian militants who were prominent as advocates for the Palestinian cause in the Arab and international arenas. He played an important role in defending Jerusalem and protecting its eastern half from attacks by Zionist forces and preserving its Arab identity during the Nakba. He was one of the prominent participants in the founding of the PLO. Edward Said once said of him: “He is one of the people I respect most in the whole world.”

Dr. Tannous wrote dozens of pamphlets and articles in both Arabic and English, all of which dealt with the issue of Palestine. He is the author of The Palestinians: Eyewitness History of Palestine under British Mandate (New York: I.G.T. Company, 1988).

Fischbach, Michael R. “Palestinian Offices in the United States: Microcosms of the Palestinian Experience.” Journal of Palestine Studies 48, no.1 (Autumn 2018): 104–18.

Labelle, Maurice M. “‘The American People Know So Little’: The Palestine Arab Refugee Office and the Challenges of Anti-Orientalism in the United States, 1955–1962.” Mashriq & Mahjar: Journal of Middle East and North African Migration Studies 5, no. 2 (2018): 78–104.