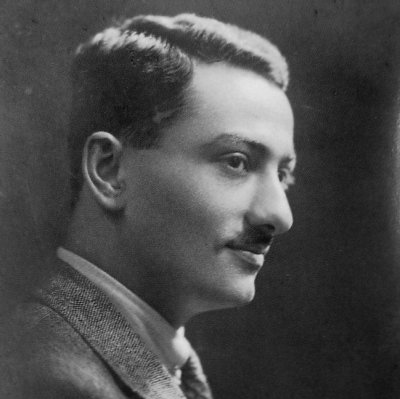 Musa Alami was born in Jerusalem on 8 May 1897 to Faidi Musa al-Alami and Zuleikha al-Ansari; he had a sister, Ni’mati. His father was appointed district officer for Bethlehem in 1902 and then elected mayor of Jerusalem, a position he held for three years. He was then chosen to be one of three representatives from the Jerusalem district in the Ottoman Chamber of Deputies. Musa Alami received his primary education at the American Colony School and then transferred to the École des Frères in Jerusalem where he completed his secondary education.

After World War I was declared, Alami was drafted into the Ottoman army and moved around between Jerusalem, Damascus, and Istanbul. After the war ended, he enrolled in Cambridge University in Britain in 1919, where he studied law for four years. During this time he joined the Inner Temple Society, one of the four “inns of court” or professional associations in London for training lawyers. He returned to Palestine in 1924 with a master’s degree in law and a law license.

Alami worked in the Mandate government’s legal department in Jerusalem as a junior legal advisor (1925–29), then as assistant to the government attorney, i.e. the public prosecutor (1929–32). In 1933, he was appointed as an advisor for Arab affairs in the office of British Mandate High Commissioner Arthur Wauchope. However, he did not last long in this position; only one year after his appointment, Zionist pressure on the British government caused London to instruct Wauchope to let go of Alami. Alami returned to his work in the legal department until 1937, when the Mandate authorities decided to dismiss him from his position and exile him to Lebanon. During the course of his work as a government official (1934–36), he had the opportunity to conduct meetings with some leaders of the Zionist movement, such as David Ben-Gurion and Moshe Shertok (Sharett).

While in exile, Alami kept traveling back and forth between Beirut and Damascus from 1937 to 1939. The Arab Higher Committee picked him as a member of the Palestinian delegation to the London Conference held at Saint James’s Palace in February 1939. Upon the outbreak of World War II in September of that year, the French Mandate authorities exiled him to Iraq.

In the summer of 1940, Alami participated (with Jamal al-Husseini) in the talks that were held in Baghdad with Colonel Stewart Francis Newcombe, envoy of the British Secretary of State for the Colonies Lord George Lloyd, under the supervision of Iraqi prime minister Nuri al-Said and attended by Shaykh Yusuf Yassin, envoy of Saudi King Abdulaziz. These talks culminated in an Arab promise to support Britain in the war in exchange for British implementation of some of the provisions of its White Paper of 1939 (MacDonald White Paper). These pertained to the formation of a joint government in Palestine which would include Arab and Jewish representatives, with representation from each group in proportion to the size of its population. However, the British government reneged on the commitment made by Newcombe, claiming that those talks could not be considered official and binding.

The British Mandate authorities permitted Alami to return to Palestine in 1941, and he began to practice law in Jerusalem. In 1944, the Palestinian Arab parties chose him to represent Palestine at the preparatory conference for the founding of the Arab League, which was held in Alexandria from 25 September to 7 November 1944. He worked hard to present two proposals to the participating delegates: the first would provide for the establishment of a pan-Arab national fund whose mission would be to save Palestinian land that had not already been appropriated by Zionist organizations so as to prevent them from seizing remaining Palestinian lands. All the Arab countries would contribute to and participate in managing this fund. The second proposal called for a concerted campaign in the media to present the Arab point of view to international public opinion, especially on the question of Palestine, so as to be on par with Zionist propaganda.

After the founding of the Arab League in March 1945 and the adoption of its charter, the league’s Economic Committee decided in its session of July 1945 to adopt Alami’s proposal to set up a collective fund to save land in Palestine. A five-year plan was agreed upon, according to which the member countries would contribute one million Palestinian pounds annually. However, Iraq was the only country that actually complied with this decision, paying 150,000 Iraqi dinars in 1946 and 100,000 dinars in 1947.

After the resolution of the Arab League was adopted, Alami hastened to form an association in Jerusalem called the Arab Development Society (ADS). Its main office was in the city of Jericho, and it was registered in the relevant government departments under the Associations Law. Its basic goals were ameliorating the conditions in Palestinian Arab villages by raising their quality of health care and the level of social services; improving the economic and social condition of Palestinian Arab peasants; improving industrial agriculture; providing incentives for planting more trees of all kinds; adopting a system of cooperative farming; and setting up institutes to give agricultural and industrial training to orphaned and disadvantaged Arabs free of charge.

However, Ahmad Hilmi Abd al-Baqi, who chaired the National Fund Committee that had been established with the aim of holding on to Palestinian lands and resisting their sale to Jews, expressed his reservation at the founding of the ADS and proposed that it be merged with the fund as one entity. Alami did not agree with him, and this resulted in a bitter dispute between the two, which had significant negative repercussions on their efforts to prevent Arab-owned land from falling into the hands of Zionist organizations.

The Arab League approved Alami’s second proposal for a media campaign, and he immediately set up media offices in Jerusalem, London, and Washington. However, the Arab Higher Committee for Palestine headed by Muhammad Amin al-Husseini launched a campaign against this initiative, which eventually resulted in the closing of these offices in 1947, especially after the Iraqi government decided to stop funding them.

After the Nakba and the annexation of the West Bank of the Jordan River by the Hashemite Kingdom of Jordan, King Abdullah sent an envoy to Alami to offer him a ministerial position, but Alami by then had decided to retire from political work and so he declined the offer. In 1949, he asked King Abdullah for 20,000 dunums in the Jericho region at the rate of fifty fils [pennies] per dunum to reactivate the ADS. In 1950, after the king granted his request, Alami brought a hundred Palestinian refugee families in the West Bank to help cultivate the society’s land with him. Less than six months later, water gushed out of the arid land, forty wells were dug, and the cultivation of grains, vegetables, and fruits began, along with the breeding of poultry and cattle.

In March 1952, Alami decided to broaden the scope of the society’s activities and opened a farm and vocational training center to teach orphan and needy refugees. After 1958, he succeeded in expanding this project with the help of the aid he had begun to receive from Arab and Western institutions, including the US Ford Foundation. This caused some people to question whether his project could be considered one whose goal was the permanent resettlement, or tawtin, of Palestinian refugees.

In June 1967, Alami was traveling in Europe to buy equipment for the society when the Israeli offensive took place. Israeli troops raided the project’s lands and caused major damages. In 1968, David Ben-Gurion, accompanied by General Moshe Dayan, surprised Alami by paying him a visit at the society’s management headquarters in Jericho. He showed them the devastation wreaked by the occupation forces on the farms of the ADS and the trees and houses that they had burned.

Alami worked hard to revive the ADS after the damage it had sustained. He made a fundraising trip to a number of European countries, where he proposed the idea of turning the society into an international association that would include experts from Britain, Canada, and Sweden. After he was able to obtain some grants and funding to deliver equipment, he returned to the West Bank to begin rebuilding.

In the last years of his life, Alami travelled frequently between various Arab and European countries until he was incapacitated by diabetes. When his condition worsened, he was transferred to the Jordanian Military Hospital in Amman, where the doctors decided to amputate one of his legs. He passed away on 8 June 1984. His body was taken to Jerusalem, where he was given a massive funeral, and he was buried in the city’s Bab al-Sahira cemetery.

Musa Alami was a prominent Palestinian nationalist who was distinguished by his depth of knowledge and sincerity. His trademark slogan was “We will not achieve victory over Israel until we are victorious over ourselves.” During his lifetime, he had friendly relations with many Arab and foreign leaders, such as King Abdullah and King Hussein of Jordan, the Iraqi regent Abd al-Ilah, Iraqi prime minister Nuri al-Said, and British foreign secretary Ernest Bevin. He also had the opportunity to engage with Egyptian prime minister Mustafa al-Nahhas, the Syrian leader Shukri al-Quwatli, and the then US president-elect John F. Kennedy, before the latter took office, among other leaders.

This book was published one year after the Nakba. In it Alami maintains that the national catastrophe of Palestine was not something “inevitable,” but that it “could have been prevented.” The Arabs did not take the correct action, he argued, thus “failure and defeat came in the place of victory that we should have achieved.” Alami tries to answer a number of questions: “How did the catastrophe occur? Why did matters take this particular turn? What were our mistakes? What were the weaknesses that were present within us as we went into the battle, and what were the chinks in our armor through which the enemy struck at us? And now, what should we do? How do we fight the extreme danger still in sight and how do we recover our beloved, usurped homeland?”

Alami says that the battle for Palestine went through two phases: in the first, the responsibility of defending it lay with the Palestinians themselves, while in the second, this was the task of the Arab armies. He then concludes in both phases, the Arabs were incapable of defending Palestine.