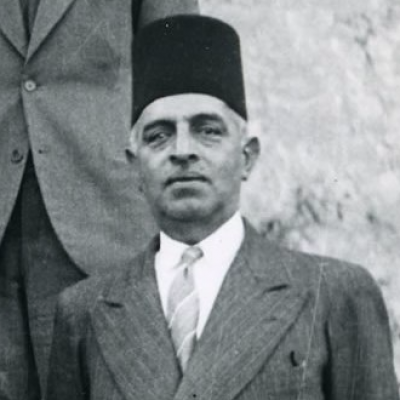 Alfred Roch was born in the city of Jaffa to a Roman Catholic family. His parents, Butrus Roch and Emilie Catafago, had three sons: Alfred, Alfonse and Michel, and one daughter, Marie. Alfred had also an older half-brother, Alexandre, from Butrus's first wife. Alfred and his wife, Olynda Baldensperger, had two daughters, Fortunée and Paulette.

Roch received his elementary and early secondary education at the Collège des Frères in Jaffa and his secondary education at the Aintoura school in Lebanon. He then went to France to study agriculture at the agricultural institute of Beauvais, where he received a degree in agricultural engineering. After returning to Palestine, he set out trying to improve the cultivation of Jaffa oranges and conducted extensive experiments in his orchard until he became an authority on the cultivation and marketing of oranges.

He became concerned about the state of affairs of his country, particularly the influx of Jewish immigrants into Jaffa. During a picnic with his friends near the settlement of Rishon LeZion on 23 September 1902, he was involved in a scuffle with settlers, during which one of the settlers was killed.

Roch had to leave the country because of the incident. He went to Greece and lived there until 1908 when the Ottoman constitution was restored. When he returned to Palestine, he took on the task to explain the question of Palestine to the general public through lectures and forums. In 1911, he established a sporting club in Jaffa, to which he was elected president for life. During World War I he was appointed as a council member in the municipality of Jaffa, a position he held once again from 1927 to 1934.

When Sharif Hussein, the ruler of Mecca, launched the Arab Revolt against the Ottomans in June 1916, Roch and some of his compatriots actively campaigned to get public support for its aims and goals, so the Ottoman authorities exiled him to Anatolia. After the end of World War I, he returned to his hometown and became an exporter of Jaffa oranges, especially to Britain. He also became active within the Palestinian national movement.

In 1927, Roch participated in founding the Palestine Free Party in the city of Jaffa, along with Abdel Raouf al-Bitar, Shaykh Abdul Qadir Abu Rabah, and others. The objectives of the party, which opposed the call for Arab unity, were to guarantee "complete independence [for Palestine] by realizing Palestinian national aspirations and sovereignty; defending personal freedoms of all kinds; [and] moving the country towards social and national unity." However, this party remained local in scope, limited to the city of Jaffa, and was short-lived.

Roch was a member of the seventh Palestinian National Congress that was held in Jerusalem in June 1928, in which both the majlisiyyun (supporters of Muhammad Amin al-Husseini, head of the Supreme Muslim Council; al-majliss) and the “opposition” participated. He was also elected to the Arab Executive Committee that emerged from it.

In early September 1929, Roch was appointed to the administrative council that was formed out of the national conference that was held in Jaffa to protest the repressive policy adopted by the British Mandate authorities in response to the outbreak of the al-Buraq uprising in late August of the same year. He was then chosen on 21 January 1930 by the Executive Committee of the Palestinian Arab Congress as a member of the Palestinian delegation headed by Musa Kazim Husseini that went to London in March that year to hold talks with British prime minister Ramsay MacDonald and the minister of colonies, Lord Passfield, about the repercussions of that uprising and the contents of the report of the British commission of inquiry (Shaw Commission). The delegation also demanded an end to Jewish immigration to Palestine, the confiscation of lands, and the transfer of their ownership to Zionist organizations.

Roch joined the Palestine Arab Party, which was founded in March 1935 and was close to the mufti of Jerusalem Muhammad Amin al-Husseini. He was elected vice-president. (Jamal al-Husseini was elected president.) On 20 April 1936, he signed a statement drafted by prominent Jaffa figures, which called upon residents to participate in the general strike; he was appointed to the committee overseeing the implementation of the strike. On 25 April, he was appointed a member of the Arab Higher Committee for Palestine, headed by the mufti of Jerusalem, which demanded a complete halt to Jewish immigration, a ban on the transfer of land to Jews, and the establishment of a national [Palestinian] government accountable to a legislative council. Then on 20 August 1936, Roch was one of the signatories to a statement made by leaders of the Christian community in Palestine, in which they appealed to the Christian world to save [Christian] holy sites from the Zionist threat and drew the attention of Christians all over the world to the danger posed by British policy, which supported the Zionist project, to the future of Palestine.

Roch testified to the Peel Commission, the royal commission of inquiry into the events of the Palestinian revolt headed by Lord Peel, in the fall of 1936. When the British Mandate authorities dissolved the Arab Higher Committee on 1 October 1937 and exiled some of its members to the Seychelles Islands, Roch happened to be with Awni Abd al-Hadi in Geneva, attending the proceedings of the League of Nations and campaigning for the Palestinian cause. Thus he was able to avoid exile, but he was barred from returning to Palestine. Two years later, Roch was a member of the Palestinian delegation headed by Jamal al-Husseini to the London conference held in February 1939 at St James’s Palace in London. In 1942, he secured permission of the British Mandate authorities return to Palestine through Lebanon.

On 22 April 1942, Roch suffered a heart attack near the Apollo cinema in the Ajami neighborhood of Jaffa, while he was on his way to his office. He was rushed to the city’s French Hospital, where he died shortly after arriving. His funeral procession was held the following day in Ajami, and he was buried in the Latin Cemetery of Jaffa.

Alfred Roch was one of the most prominent Palestinian leaders during the British Mandate era and is considered one of the most renown figures of the Roman Catholic community in Palestine. He firmly opposed Zionism and colonialism. His contemporaries testified to the great love and devotion he had for his country.