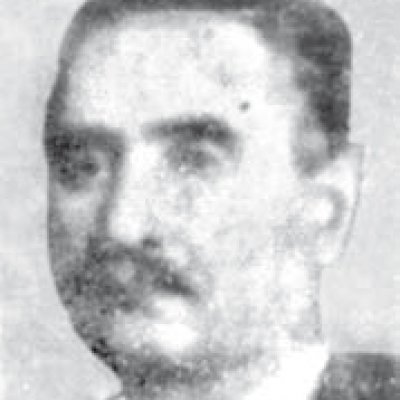 Mu‘in al-Madi was born in the village of Ijzim (Haifa district). His father’s name was Abdullah.

He attended the village school for his elementary education and then moved with his father to Haifa where he completed his education at the Rashidiyya School.

In 1908 he enrolled at the Malakiyya College in Istanbul and graduated in 1912. He obtained an administrative job in the town of Kashmuna, in Anatolia, but was soon appointed mayor of Acre, then qa’im maqam (district commissioner) of Baniyas province in Syria, and was finally transferred to the central government (diwan) of the province of Beirut.

Mu‘in al-Madi joined the nationalist , which had been founded in Paris in 1911. He was arrested during World War I because of his Arab nationalist activity and was acquitted by the Military Tribunal in Aley, Lebanon.

He left Beirut for Damascus where he hid with a Christian family in the Bab Tuma quarter and remained with them until the Arab army (led by Emir Faisal) entered the city in October 1918.

In June–July 1919, al-Madi took part in the General Syrian Congress held in Damascus, representing the city of Haifa. He called for the total independence of Syria within its natural borders and rejected the Balfour Declaration and Jewish immigration. In the spring of 1920 he occupied the post of Head of Intelligence Services in the Arab government formed by King Faisal.

Al-Madi was a founder of the Arab Palestinian Society founded in Damascus in late May 1920. Among its objectives was to resist Jewish immigration, to include Palestine within Syrian unity, and to unify the views of all Palestinian societies, and he was elected a member of its administrative board. He was also a member of the Palestinian delegation that met King Faisal in Damascus on 19 May 1920; the king assured the delegation of his unshakable commitment to an Arab Palestine.

After the Faisal government in Damascus fell at the hands of the French in July 1920, al-Madi and some members of the government headed to Dir‘a, south of Damascus and near the present frontier between Syria and Jordan. When the scheme of King Faisal to establish a national government in Dir‘a or in Transjordan collapsed, al-Madi returned to Palestine to continue his nationalist activity. He thus took part in the sessions of the Third Palestinian National Congress held in Haifa in December 1920 and was elected a member of its executive committee.

Mu‘in al-Madi was a member of the Arab Executive Committee, headed by Musa Kazim al-Husseini, which travelled to Cairo in March 1921 to meet Winston Churchill, the British Secretary for the Colonies, to whom they presented a memorandum outlining the nationalist demands adopted by the Third Arab Palestinian Congress.

The Seventh Palestinian National Congress held in Jerusalem in June 1928 elected al-Madi and Rashid al-Haj Ibrahim, the representatives of Haifa, as members of the Arab Executive Committee, which issued from that congress.

Al-Madi attended the Pan-Islamic Congress held in Jerusalem in December 1931 and the Arab National Conference held on the margins of that congress in the house of Awni Abd al-Hadi in Jerusalem. On 2 August 1932, he was a cofounder of the Palestinian Arab Independence Party, which had three guiding principles: Arab countries must have full independence, the Arab countries are one indissoluble unit, and Palestine is an Arab country and a natural part of Syria.

Together with other Independence Party members and members of the Arab Executive Committee, al-Madi led two mass demonstrations organized in Jerusalem and Jaffa in October 1933 to protest British Mandate policy and to call for a stop to Jewish immigration and the transfer of Arab lands into Jewish hands.

Al-Madi was a member of the Haifa delegation, which went to Jerusalem following the outbreak of the General Strike in April 1936, to urge Haj Amin al-Husseini to create a supreme leadership for the popular strike, consisting of the heads of the six Arab political parties. This came to be called the Arab Higher Committee.

During the 1936 revolt, al-Madi travelled to Iraq at the request of Haj Amin al-Husseini, where he helped to recruit a Lebanese army officer and expert in guerrilla warfare, Fawzi al-Qawuqji, to head a group of armed volunteers drawn from several Arab countries in order to join the Palestinian revolt. The British authorities began to tighten their surveillance of him.  He was a member of a delegation sent by the Arab Higher Committee to Iraq, Saudi Arabia, and Syria in late 1936 to present their viewpoint, which was to boycott meetings of the Peel Commission sent by the British government to investigate the causes of the 1936 rebellion. The Arab officials in these three countries were of the view that the Palestinian national leadership should contact the British Commission, and this is what eventually happened.

In 1937, the British began pursuing al-Madi when the rebellion had grown more fierce as a result of the partition plan recommended by the Peel Commission, so he took refuge in Damascus, where the French authorities exiled him to the province of Iskenderun. From there he fled in 1941 to Istanbul, running away from pursuit by British intelligence services, and remained there until the end of World War II.

In Istanbul, al-Madi burnt all documents and official papers in his possession for fear they might fall into the wrong hands and be used against the Palestinian Arab movement. This was a huge loss to the Arab cause.

In 1946 he returned to Syria after it had won its independence and took part in the celebration that accompanied the withdrawal of French troops on 17 April of that year. He then left Syria for Palestine after the Mandate authorities had issued a pardon.

Mu‘in al-Madi died in Damascus and, following a moving funeral, was buried in al-Dahdah cemetery.

Mu‘in al-Madi joined the Arab nationalist movement from its inception, and he was engaged very early in the Palestine cause. He was a man of independent mind, firm in principle, morally upright, energetic, generous, very kind and gentle in character, and averse to all pretense, and he earned the respect of all who knew him.