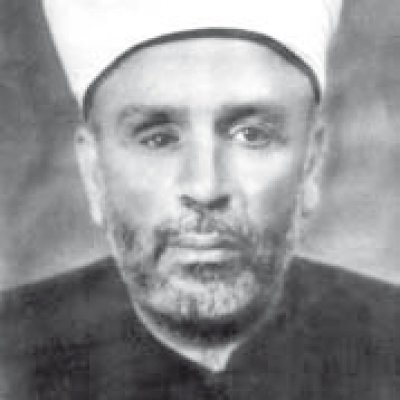 Born in Jerusalem, Abd al-Qadir Muzaffar received his primary and secondary education from the city’s religious shaykhs and then studied at al-Azhar University in Cairo. After obtaining the Ahliyya diploma, he returned to Jerusalem to work in commerce.

He was intensely loyal to the Ottoman state and deeply suspicious of British and Western designs against Islamic lands. He became a member of the Committee of Union and Progress and was president of the Jerusalem Society of Fraternity and Virtue.

During World War I, Muzaffar was part of the Turkish military expedition to the Suez Canal, urging the expulsion of the British from the canal and exhorting the Turkish troops to fight them.

In 1916 he was appointed Mufti of the Fourth Army of the Ottoman Empire, succeeding Shaykh As‘ad al-Shuqairi. He exerted a lot of effort to relieve the sufferings of Arab nationalists who were pursued or imprisoned by the authorities.

During the Faisal era in Syria (1918–20), Muzaffar settled in Damascus where he became president of the Arab Club. In 1919, the Arab government led by Faisal sent him on a national mission to Mustafa Kamal Ataturk in Ankara.

In Palestine, Muzaffar was deeply involved in the nationalist struggle. He worked with Musa Kazim Husseini and the Muslim Council party (al-Majlisiyyun), the supporters of Haj Muhammad Amin al-Husseini.

Muzaffar headed the General Palestinian Congress held in Damascus on 27 February 1920. In the resolutions it adopted, the congress rejected the idea that “Southern Syria (Palestine) was not part of Syria” and opposed the Balfour Declaration and Zionist immigration.

In June 1922 the Arab Executive Committee decided to send him as head of a Palestinian delegation to Egypt, Sudan, and the Hijaz. The arrival of the delegation in Hijaz coincided with the Haj season in early July, so Muzaffar instituted a widespread campaign of information among the pilgrims resulting in several thousand telegrams being sent to the League of Nations protesting the British Mandate over Palestine.

Haj Amin al-Husseini delegated him to travel to India to collect donations for repairs to be done to al-Aqsa Mosque. As a delegate from Jaffa, Muzaffar took part in the Muslim Congress held in Jerusalem in early November 1928, which included delegates from Damascus, Beirut, and Transjordan. That congress created the Society for the Protection of al-Aqsa and other Muslim Sanctuaries to counter Zionist ambitions.

The British authorities arrested him in Jaffa for a short period following the al-Buraq Disturbances in August 1929.

Muzaffar participated in the Arms Congress held in Nablus on 31 July 1931 to protest the arming of the Jews and British collaboration with them and to proclaim the adherence of the Arab Executive Committee to a policy of peaceful protest to deal with such important issues.

Muzaffar assumed the post of Secretary of the Bureau of the Pan-Islamic Congress held in Jerusalem from 7 to 17 December 1931 to defend Muslim sites. This congress was attended by numerous delegates from Muslim and Arab countries. He was also elected a member of the Executive Committee that emerged from that congress.

He was a member of the Higher Committee of the National Fund, founded in September 1932, under the presidency of Ahmad Hilmi Abd al-Baqi. This committee was to become the basis of the company founded as The Arab Company to Save the Lands of Palestine.

Muzaffar and Musa Kazim Husseini led the congregation from the Great Mosque of Jaffa in a mass demonstration in October 1933, in defiance of the British ban; they demanded an end to Jewish immigration. He was arrested along with other demonstrators and rejected a deal whereby he would have been released in return for an assurance of good conduct, preferring imprisonment for six months. The poet, Ibrahim Tuqan, applauded his gesture by writing a poem, “Abd al-Qadir al-Muzaffar.”

After his release from prison, Muzaffar ended his political career. He ceased to take part in Palestinian nationalist activities or to work with nationalist leaders. He was forced to leave Jaffa in 1948, following its occupation by Zionist forces, and sought refuge in Amman.

Muzaffar was one of the most eloquent orators of the Palestinian national movement. A poet and a man of letters, he was known for his self-control, forceful character, and piety; he was a man of humor and charm who was much beloved by friends and greatly respected by adversaries.

He died in Amman and was buried in his hometown, in the cemetery of Bab al-Sahira (Herods Gate), Jerusalem.