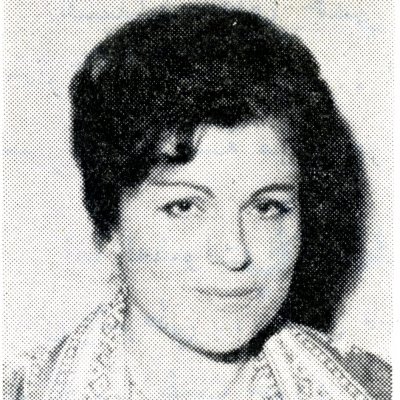 Wadi‘a Qaddura was born in Beirut, to Lebanese parents: Mustafa Qaddura and Khanum al-Husami. She had three sisters (Adiba, Rafiqa, and Zahia, a historian) and two brothers, Adib and Labib. She and her husband, Adib Khartabil, had three sons, Faruq, Marwan, and Hisham, and one daughter, Amal.

She first studied at the American School for Girls, where she obtained the high school diploma and then attended the Beirut Junior College for Women for two years in preparation for studying medicine but then interrupted her studies.

Shortly after her arrival in Tulkarm, she was invited to head the Ladies’ Charitable and Social Society, which opened a clinic to treat the poor in which several doctors worked under the supervision of her husband. She founded a center to care for mothers and children, a nursery, and a workshop for needlework and embroidery. Under her leadership, the society helped to deliver medicines, food, and clothing to the rebels of 1936 and took care of the families and children of the martyrs.

In December 1944, she was a member of the Palestinian delegation to the General Congress of Arab Women, which met in Cairo, where she represented the Tulkarm women’s society. At that congress she delivered a speech entitled “The Call of the Land.” She also took part in several sessions of this congress, which continued to meet until the last days of the British Mandate in Palestine.

After the Nakba of 1948, she was forced to leave Palestine. She and her children sought refuge in Beirut, where her husband joined them shortly thereafter. In 1952, she founded in Beirut the Union of Arab Palestinian Women, the first general union of Palestinian women to be established in the diaspora, and headed its administrative committee. In late 1955, the union established the Happy Childhood Charitable Center in the town of Suq al-Gharb in Lebanon to care for children with chest diseases. After the Israeli aggression of 1967, it was called the Happy Childhood Home and began to care for and to educate the sons and daughters of the martyrs of the Palestine Liberation Organization, until its buildings were destroyed by the Israeli army during its invasion of Lebanon in the summer of 1982.

Ever since the mid-fifties, Khartabil represented the Union of Arab Palestinian Women in many congresses held by the Women’s International Democratic Federation, which used to convene once every three years.

Following the tripartite attack on Egypt in the autumn of 1956, Khartabil became a member of the Popular Committee to Aid Egypt, formed in Lebanon and headed by Lebanese leader Rashid Karami.

Khartabil was invited to attend the meeting of the preparatory committee for the first Afro-Asian Women’s Conference, held in Cairo in early 1961, from which issued the federation called la Fédération des femmes afro-asiatiques.

In July 1962, she participated in a conference of the Women’s International League for Peace and Freedom held in the city of San Francisco. In the autumn of 1963, she and Yusra al-Barbari were members of the first Palestinian delegation, headed by Ahmad al-Shuqairi, to the United Nations. She was also one of the first to suggest the idea of unifying all the Palestinian women’s societies and unions into one general union. Toward that goal, and as head of the Union of Arab Palestinian Women in Lebanon, she called for a meeting in Beirut in early July 1963, which was attended by representatives of these societies and unions.

Wadi‘a Khartabil was chosen to be a member of the First Palestine National Congress held in Jerusalem in late May 1964, which then turned into a Palestinian National Assembly at which the Palestine Liberation Organization was established. She also took part in the two sessions of the national assembly held in Cairo in 1965 and in Gaza in 1966. She was a member of the preparatory committee that supervised the creation of the General Union of Palestinian Women at the conference held in Jerusalem in July 1965, and was elected a member of the administrative council of that Union.

After the Israeli attack in June 1967, Khartabil organized a wide campaign through the Union of Arab Palestinian Women to collect contributions of money, medicines, food, bedding, and clothes to be given to the homeless refugees in Jordan and Syria. Answering the call of the union and with the participation of women’s organizations and labor unions in Lebanon, several demonstrations and rallies were held to protest the Israeli aggression and in support of the Palestinian resistance.

Khartabil attended the fourteenth and fifteenth sessions of the Palestine National Council, held in Damascus in January 1979 and April 1981. She worked as an advisor to the Palestine Red Crescent Society in Lebanon and supervised the work of its women volunteers.

In 1983, she sought to revive the Union of Arab Palestinian Women, which had ceased its activity following the Israeli invasion of Lebanon in 1982. In 1985, she succeeded in reactivating it and was elected its president for life in appreciation of her role in the service of the Palestinian women’s movement.

Under her supervision, the union established a workshop for needlework and handicrafts in the Shatila Refugee Camp in the suburbs of Beirut. The union also opened a nursery called The Dalal Mughrabi Nursery-The Happy Childhood House.

In 2003 President Yasir Arafat awarded Wadi‘a Khartabil the Palestine Medal. In February 2007, a few weeks before her death, the Maqasid Islamic Charitable Society named a meeting hall after her, to serve as a permanent exhibition hall for handicrafts for young men and women, in recognition of her pioneering work for women in Lebanese society.

Wadi‘a Qaddura Khartabil died in Beirut and was buried in the Bashura cemetery. Abbas Zaki, the PLO representative in Lebanon, delivered the eulogy, during which he lauded her pioneering work in the Palestinian women’s movement and in founding the PLO. She was also eulogized by the Arab Nationalist Club in Beirut, where she was a member of its board of trustees, citing her as “a symbol of Lebanese-Palestinian solidarity and of patriotic commitment and national dedication.”

A Rich and Diverse National Heritage