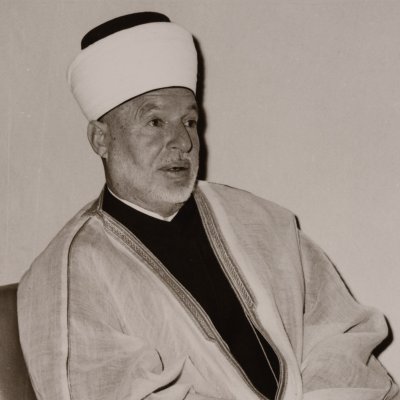 Mohammed Ali al-Ja‘bari was born in the city of Hebron. His father was Ahmed al-Ja‘bari. He had six sons: Noureddin, Burhan, Sharif, Mohammed Rashid, Samir, and Nabil.

Ja‘bari went to primary and secondary school in Hebron and then moved to Egypt, where he enrolled at al-Azhar University in Cairo. He was awarded his Ahliyya diploma in 1918 and the ‘Alimiyya in 1921. He obtained a specialist qualification in preaching and spiritual instruction in 1922.

Ja‘bari went back to Hebron and taught at the Ibrahimi mosque. He began to take part in public life in 1924 as a member of the Islamic-Christian Association in Hebron. In 1925 he applied to the governor of Hebron for permission to set up an Association of Hebron Ulama. He then headed the Association of Muslim Youth that was set up in the city in 1928.

Ja‘bari represented Hebron at the 7th Palestinian National Congress, which was held in Jerusalem in June 1928. He also participated in the Islamic Conference in  Defense of al-Buraq and Muslim Holy Places against Zionist ambitions, held in Jerusalem in early November 1928.

Ja‘bari joined the Palestinian law school known as the Jerusalem Law Classes and in 1931 qualified in shari‘a and statutory law. He practiced as a lawyer in the shari‘a courts and as a registrar, a teacher, and a preacher in the Ibrahimi mosque in Hebron until 1937.

Ja‘bari took part in the first Arab Youth Congress that was held in Jaffa in early January 1932 and was elected to the executive committee that the conference set up.

In March 1935 Ja‘bari joined the Palestine Arab Party led by Jamal al-Husseini, and in 1944 he was chosen as a member of the party's central committee.

Ja‘bari was detained by the British authorities in July 1936 after a general strike was declared, and he was held in Sarafand detention camp until November of the same year. The Hebron municipality and city notables sent him a letter of support in the detention center.

In September 1937, Ja‘bari took part in the Arab National Congress held in the Syrian village of Bludan in solidarity with Palestine and with the struggle of the Palestinian people to end the British Mandate, reverse the Balfour Declaration, and reject the partition of Palestine.

The British Mandate authorities appointed him as mayor of the Hebron municipality on 28 October 1940, and he remained in that post until 25 April 1948. As mayor, Ja‘bari participated in all the conferences of Palestinian mayors between 1941 and 1947 and chaired some of them. He also chaired the conference of Arab mayors in the Jerusalem area held on 11 May 1946.

Ja‘bari was the head of the National Committee and the Emergency Committee in Hebron when the United Nations passed its partition resolution in November 1947 and fighting broke out.

After the Nakba, Ja‘bari was one of the most prominent leaders of the Palestinian opposition to the Arab Higher Committee led by Haj Amin al-Husseini and to the All-Palestine government proclaimed by the Palestine National Council held in Gaza in September 1948 (also headed by Husseini). Ja‘bari headed the alternative Jericho Conference held in early December 1948 and called for the West Bank to merge with Trans-Jordan and for West Bank Palestinians to pledge allegiance to King Abdullah bin Hussein as king of the unified state.

Ja‘bari held several official positions in the Jordanian administration and became a member of the Jordanian senate on 20 April 1950, a position he held until 1963. Between 1955 and 1961 he served as minister of agriculture, minister of justice, and minister of education.

In May-June 1964 Ja‘bari took part in the first Palestine National Council held in Jerusalem, which led to the creation of the Palestine Liberation Organization under Ahmad al-Shuqairi.

When Israel occupied the West Bank, East Jerusalem, and the Gaza Strip in June 1967, Ja‘bari called for an international body to supervise those territories for a five-year period, to be followed by the establishment of an autonomous Palestinian administration. He submitted that proposal to UN envoy Gunnar Jarring in late 1969.

Ja‘bari founded Hebron University, which developed from the Islamic shari‘a college, established in 1971.

In the spring of 1972 Ja‘bari ran in the municipal elections in Hebron and was elected mayor. (The PLO had called for the boycott of the elections, which were held in the West Bank under the supervision of the Israeli occupation authorities.) He aspired to set up a council of West Bank mayors and other notables to provide political leadership for the inhabitants of the West Bank and to speak in their name.

He remained the mayor of Hebron until spring 1976, when  municipal elections were won by a bloc that supported the PLO, led by Fahd al-Qawasmeh.

At the end of 1977, Ja‘bari had a stroke and was paralyzed. He was confined to his bed until he died on 29 May 1980. Thousands of people came from all over Palestine and Jordan to attend his funeral. He was buried in Hebron.

Mohammed Ali al-Ja‘bari was a religious scholar and a prominent Palestinian politician. He was one of the most famous mayors Hebron has had and for many decades he was an authority on political and religious matters in the city. After the Nakba he stood out as one of the Palestinian politicians most favorable to a merger between the West Bank and Jordan. After Israel occupied the West Bank in 1967, he made bold political proposals that stimulated widespread debate in Palestinian circles.