The village was situated on the edges of a wadi on the higher slopes of Mount Carmel. It was near the highway between Haifa and Tel Aviv, a location that accorded it special importance during the war of 1948. In the late nineteenth century, Ayn Ghazal was a small village built of stone and mud. The village's 450 residents cultivated 35 faddans (1 = 100-250 dunums).

The villagers were Muslims and maintained a shrine for a local sage named Shaykh Shahada. The village had an elementary school for boys that was founded around 1886, during the Ottoman period. It also had an elementary school for girls and a cultural and athletic club. Water from a nearby well, drilled in the 1940s, was pumped into the village via a pipeline. The village economy was based on livestock breeding and agriculture; in 1944/45 olive trees were planted on about 1,400 dunums, and a total of 8,472 dunums was allocated to cereals. The village's proximity to the city of Haifa made it possible for part of the population to work in the service sector of the port and in its commercial section.

The New York Times quoted a Jewish newspaper as saying that there was an attack on the village on 14 March 1948, in which four houses were razed to the ground. The British police stated that one Arab woman was killed and five men were wounded in the attack. The Palestinian newspaper Filastin had reported an attack on Ayn Ghazal a few days earlier, on 10 March, without giving further details. Two months later, on 20 May, another attack took place. An informant told a reporter for the Associated Press that Ayn Ghazal was stormed by the Haganah after snipers halted traffic on the Haifa-Tel Aviv road. No mention was made of casualties.

Ayn Ghazal, Jaba', and Ijzim constituted the Little Triangle south of Haifa, which resisted a number of Israeli attacks in subsequent months and formed a pocket that was not occupied until the end of July 1948. Three main attempts were made to capture the villages. The first two attempts, on 18 June and 8 July, were successfully repulsed by the villages' defenders. In the third, the Israeli army took advantage of the second truce to strike with a special force drawn from units of the Golani, Carmeli, and Alexandroni brigades. The operation began on 24 July and involved massive artillery and aerial bombardment for a whole day. (Later, Israeli foreign minister Shertok lied to a United Nations mediator and said that 'no planes were used.') On 26 July, an Associated Press story noted simply that Israeli planes and infantry had violated the Palestinian truce by attacking the three villages.

Despite the severity of the onslaught, the villages still took two days to occupy, and Israeli troops continued to fire on villagers as they fled. Israeli historian Benny Morris states that captured villagers were ordered to bury the charred bodies of from 25 to 30 people at Ayn Ghazal, and some reports indicated that there had been a massacre in the village. But the Israeli authorities denied this, saying that the bodies were burned because they had been found dead and had begun to decompose. The New York Times reported at the time that Israeli liaison officers admitted to the UN truce supervisors that nine villagers had been killed at Ayn Ghazal. The United Nations could find no evidence of a massacre. However, in mid-September UN investigators put the number of killed or missing from the three villages at 130, according to the Times. UN mediator Count Folke Bernadotte condemned Israel's 'systematic' destruction of Ayn Ghazal and Jaba' and asked that the Israeli government restore at its own expense all houses damaged or destroyed during and after the attack. Bernadotte said that 8,000 people had been driven out of the three villages and demanded that they be allowed to return. Israel rejected Bernadotte's demand. 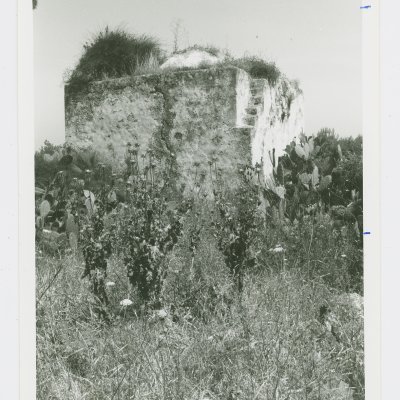 The dilapidated shrine of Shaykh Shahada is the only standing structure on the village site . Ruins of walls and piles of stones can be seen all over the site, as well as stands of pine, cactus, and fig and pomegranate trees. The site has recently been fenced in for use as a grazing area. The flat lands around it are also used for growing vegetables, bananas, and other types of fruit. Parts of the slopes are planted with almond trees. 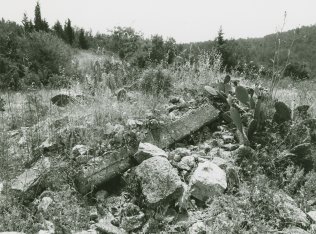 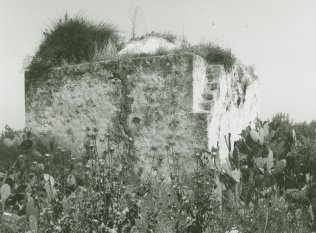 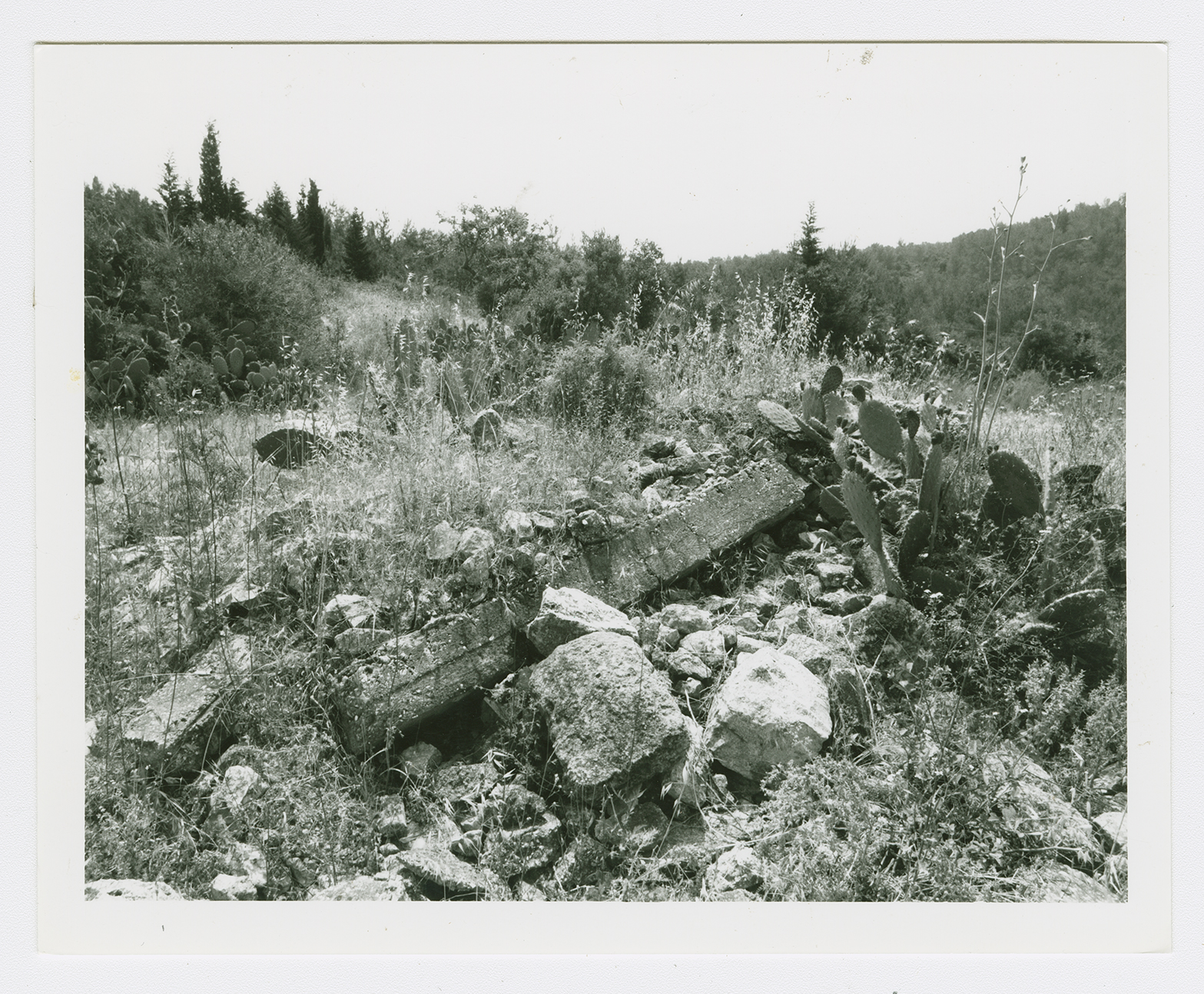 The shrine of Shaykh Shahada.