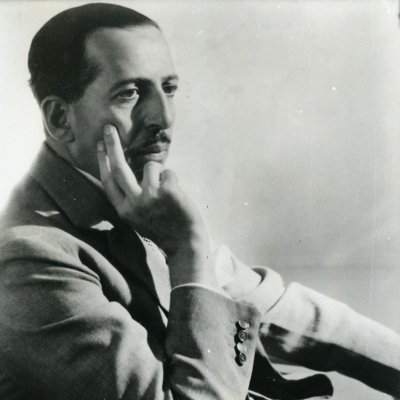 George Antonius was born in Deir al-Qamar, Lebanon. He is the son of Habib Antonius. He and his wife, Katy Faris Nimr, had a daughter, Thurayya (Tutu).

He completed his primary and secondary school education at Victoria College, Alexandria (1902–10). He was then admitted to King’s College, Cambridge (1910–13), where he obtained a degree in engineering in 1913.

Returning to Alexandria, he worked in the Public Works Department of its municipality until the outbreak of World War I.

Between 1914 and 1916, he worked as a war correspondent with the British forces in Egypt.

At the end of the war he went to Palestine where he worked in the British administration in the Public Services Department; he soon quit that job.

Between 1919 and 1921 he worked with King Faisal’s delegation in Europe and publicized Arab causes in western Europe and especially in England, where he delivered a lecture to a parliamentary group interested in the Middle East.

In 1921 he was appointed deputy to the Director of Education in Palestine where he sought to reform the Department of Education; he submitted several reports and recommendations to that end, but these were not approved by the British High Commissioner.

Between 1925 and 1927 Antonius cooperated with Sir Gilbert Clayton, Civil Secretary to the Government of Palestine, in negotiations to draw up the frontiers of Saudi Arabia, the Yemen, Iraq, and Jordan.

In 1927 Antonius was transferred from the Department of Education to the Secretariat of the Palestine Government. That same year he was awarded the Commander of the British Empire distinction.

In 1930 Antonius resigned from the Mandate government and went to work for the Institute of Current World Affairs in New York.

In 1931 he became an unofficial adviser for local affairs to the British High Commissioner in Palestine and began working on his magnum opus, a history of the origins of Arab nationalism.

In 1935 Antonius gave a series of lectures in the United States and Canada, in which he warned about the explosive situation in Palestine and the outbreak of revolt, given Britain’s pro-Zionist policies.

During the years 1936 and 1937, Antonius was working on his history book as the General Strike and the Great Palestinian Rebellion unfolded. In early 1937 he appeared before the Peel Commission as a witness. The commission had arrived in Palestine to investigate the causes of the revolt. In his statement to that commission, Antonius emphasized British partiality toward the Zionists. In July of the same year he criticized the partition scheme proposed by that commission in its report.

Antonius completed The Arab Awakening in 1938, while living in Egypt. This continues to be a classic text in modern Arab history and has been translated into Arabic and several other languages.

In 1939, Antonius was appointed secretary of the Palestinian delegation to the London Round Table conference and acted as adviser to the other Arab delegations, becoming the driving force behind that conference.

In 1940, he collected information about Arab public opinion regarding World War II. He lived in Beirut but would travel to Egypt and Palestine from time to time.

In 1941, he visited Iraq. By the time he returned to Beirut, he was sick and spent the summer of that year in hospital. The US consul in Beirut saved him from being arrested by the French Vichy authorities.

He died in Jerusalem in 1942 and was buried in the Zion cemetery. Two prominent Palestinian educators, Ahmad Samih al-Khalidi and Khalil al-Sakakini, delivered the eulogies.

Author, man of letters, and politician, George Antonius was a man of great intellectual power, perspicacity, and logical thought. He had a superb command of both English and French and was greatly dignified in bearing and speech. He was a confidante of Haj Amin al-Husseini. His book, The Arab Awakening, caused a great stir in western quarters interested in the Arab world.

The Arab Awakening: A History of the Arab National Movement. Beirut: Khayats, [1938] Translated into Arabic as Yaqzat al-‘Arab by Ali Haidar al-Rikabi, Amman, 1946. A new edition of this work was published by Dar al-‘ilm li-l-malayin, in Beirut, in 1966, translated by Nasir al-Din al-Asad and Ihsan Abbas, with a foreword by Nabih Amin Faris.