The village stood on level ground in the western foothills of the Hebron Mountains, south of a wadi that bore the same name: Wadi Bayt Jibrin. The presence of the wadi facilitated road building and put the village at the intersection of roads leading to Hebron, Jerusalem, Ramla, and al-Faluja (Gaza sub-disctrict). The Arabic name of the village meant 'house of the powerful' and may have been derived from Aramaic. Regional folklore had it that the village was originally inhabited by Canaanites who were said to be a race of giants. Bayt Jibrin was a prominent town in antiquity. Among the Jews it was known as Beyt Guvrin. Bayt Jibrin was first mentioned in Latin sources by Josephus as Betogabra, a village in the heart of Idumea. In A.D. 200, the emperor Septimius Severus granted the town the status of a Roman colony and renamed it Eleutheropolis. It was also granted a large tract of land, the largest in the country at that time. In the fourth century it became a bishopric. The Muslims captured it toward the end of the reign of the first caliph, Abu Bakr al-Siddiq (d. A.D. 634). The village was the burial place of a companion of the prophet Muhammad, Tamim Abu Ruqayya. According to the Muslim traveler al-Maqdisi (d. ca. A.D. 990), in A.D. 985 Bayt Jibrin was an emporium for the towns and villages in the surrounding countryside, even though it was in decline at the time. It was later conquered by the Crusaders -who at first mistook it for Bir al-Sabi', and then called it Beth Giblin and built a castle there (in 1137). Yaqut, writing at the beginning of the thirteenth century, referred to Bayt Jibrin as one of the principal towns in Palestine, with a Crusader castle that had been destroyed by Salah al-Din al-Ayyubi (Saladin). The Mamluk sultan al-Zahir Baybars (1233-1277) captured Bayt Jibrin, ending the Crusaders' control of the village.

Bayt Jibrin prospered during the Mamluk period, and in the late thirteenth century served as a postal station between Gaza and al-Karak (today a town in southern Jordan). A Muslim mystic, Muhammad Ibn Nabhan al-Jibrini, set up a hermitage in it and died there in 1343. Bayt Jibrin was subsequently refortified, once by the Ottomans in 1551 and again by the British during the Mandate.

In 1596, Bayt Jibrin was a village in the nahiya of Gaza (liwa' of Gaza), with a population of 275. It paid taxes on a number of crops, including wheat, barley, and sesame, as well as on other types of produce, such as goats and beehives.

The Syrian Sufi traveler al-Bakri al-Siddiqi, who journeyed in the region in the mid-eighteenth century, reported spending a pleasant night in the village.

In the late nineteenth century, Bayt Jibrin was a large village built of stone and mud and situated in a sheltered position on the slope of a valley. Olive groves extended along the valley to the north. The village, which then had an estimated population of 900 to 1,000, was famous for a number of large caverns nearby. A two-storey stone house that belonged to the headman of the village stood in the center of the village.

, reported that Bayt Jibrin had 1,000 people in 1912 and that it occupied about one-third of the ancient site.

During the Mandate, Bayt Jibrin served as a commercial and service center for the area's villages. Its population consisted entirely of Muslims. It had two schools, a clinic, a bus stop, and a police station. A weekly market was held there on Tuesdays that attracted customers from neighboring communities. The people of Bayt Jibrin cultivated grain and fruit. Olive trees were planted in the hilly areas around the village. Agriculture was primarily rainfed. In 1944/45 a total of 30,613 dunums was allotted to cereals 2,477 dunums were irrigated or used for orchards. Archaeologists working on the site of Bayt Jibrin have recovered mosaic floors from two churches dating to the fourth and sixth centuries A.D., in addition to formerly inhabited caves, burial places, and pigeon towers.

In the earlier stages of the war, when Egyptian forces entered Palestine, the First Battalion of the Egyptian army had been ordered to take up positions in Bayt Jibrin (located on the front lines separating Israeli and Egyptian forces) during the second half of May. In early May, the New York Times correspondent had reported that thousands of Jaffa's inhabitants had fled inland to the Hebron area, 'large numbers of them to become cave dwellers in the historic caves of Bayt Jibrin, northwest of Hebron.'

Israeli sources indicate that the occupation of Bayt Jibrin occurred during the last stage of Operation Yoav . Although Operation Yoav was waged mainly in the southern coastal area (where Israeli forces eventually succeeded in occupying al-Majdal and Isdud), it also involved a thrust by the Giv'ati Brigade into the Hebron hills. Moreover, after 18 October, Operation Yoav was coordinated with Operation Ha-Har, which was a thrust into the southern part of the Jerusalem corridor. Both operations were under the command of Yigal Allon, 'who in all his previous campaigns had left no Arab civilian communities in his wake,' in the words of Israeli historian Benny Morris.

During Operation Yoav, the Giv'ati Brigade was charged with moving north and east towards Hebron, while other Israeli forces were pushing southwards in the direction of Gaza and the Negev. Morris says that Bayt Jibrin had been bombed and strafed at the beginning of Operation Yoav on 15-16 October, but the New York Times reported on 20 October that 'Bayt Jibrin was added to the usual targets of the Israeli air force for the first time last night [18 October],' and it was 'pummeled' again over the next few days. These attacks and a preliminary night raid led to what Morris describes as a 'panic flight' from the village.

The New York Times printed an Israeli military spokesman's comments on the overall aims of the operation. He said that the Israeli army had no intention of capturing Egyptian army strongholds in the area, but 'in operations to cut the roads, some places were so weakened that it seemed the obvious thing to take them.'

Villages such as Dayr al-Dubban (some 6 km to the north) were captured during the northwards push on 23-24 October 1948. Morris records an initial attack on Bayt Jibrin during the night of 24 October 1948, but states that it was not occupied until 27 October. The History of the Haganah puts the initial raid on 26 October and confirms that it was occupied the following day.

When Bayt Jibrin was finally occupied, its capture was considered by the Israelis to be an important military advance on the southern front. The 'Faluja pocket' was created upon its occupation.

After most of Operation Yoav had been completed, some Israeli units continued to advance eastwards in the Hebron area. On 30 October, the New York Times correspondent reported that 'Israeli patrols found that several villages in northern Negeb, between Beit Jibrin and Hebron, were empty and occupied them.' In Gaza sub-disctrict, Israeli units sacked the city of al-Majdal along with a number of satellite villages on 4-5 November 1948. This final thrust was preceded by air raids along the entire length of the southern coastal area.

The village does not seem to have been destroyed upon occupation, at least not immediately. Morris cites the case of Bayt Jibrin in describing Israeli prime minister David Ben Gurion's attitude to the destruction of villages: 'In his diary, Ben Gurion occasionally seems to have deliberately tried to put future historians off the scent. Thus, on 27 October.... he found time to insert the following: 'Tonight our army entered Beit Jubrin.... Yigal [Allon, OC Southern Front] asked [permission] to blow up some of the houses. I responded negatively.'''

The settlement of Beyt Guvrin was established on village lands in 1949, north of the village site.

A mosque, an unidentified shrine, and a number of houses are all that remain. The mosque, which is a stone structure, has a flat roof and round-arched high windows on all sides, as well as similarly arched doors. In the back it has a domed porch with a large round arch. It is surrounded by wild vegetation. Some of the houses are inhabited by Jews, while others are deserted. One of the houses-a two-storey stone building with a rectangular door and windows-has been converted into an Israeli restaurant and outdoor cafe, bearing the Arabic name al-Bustan ("the garden"). Prefabricated Israeli houses have been erected near the deserted shrine. The site is overgrown with tall grasses, shrubs, cactuses, and eucalyptus trees. Because of its rich antiquities, the surrounding area has been made into a tourist attraction. 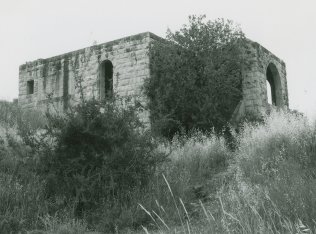 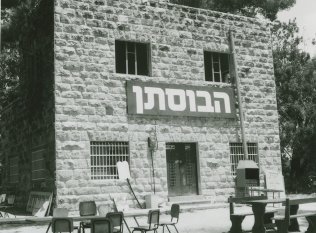 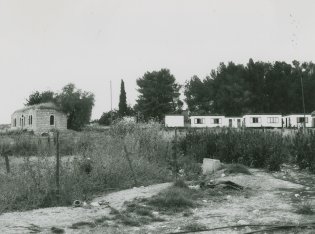 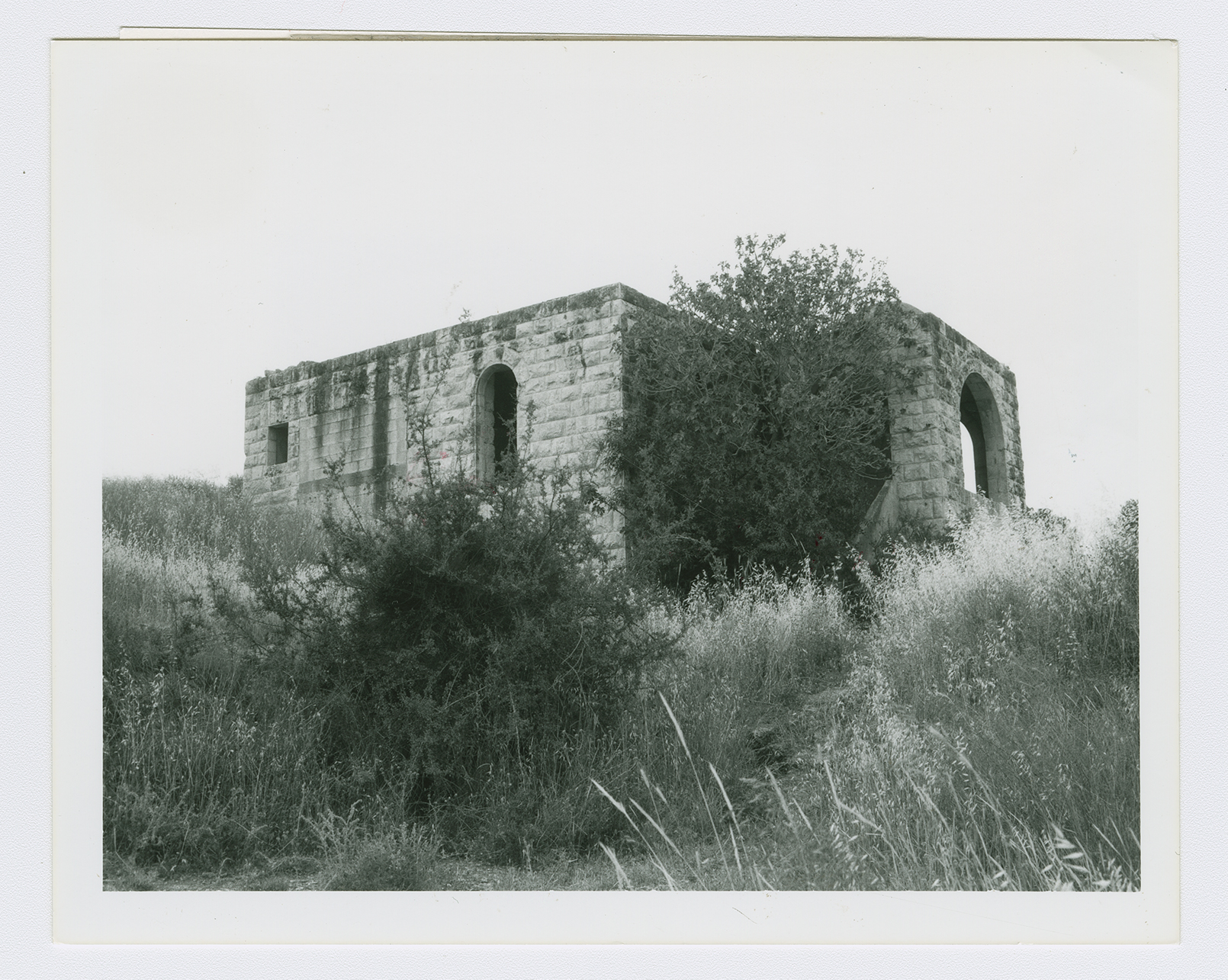 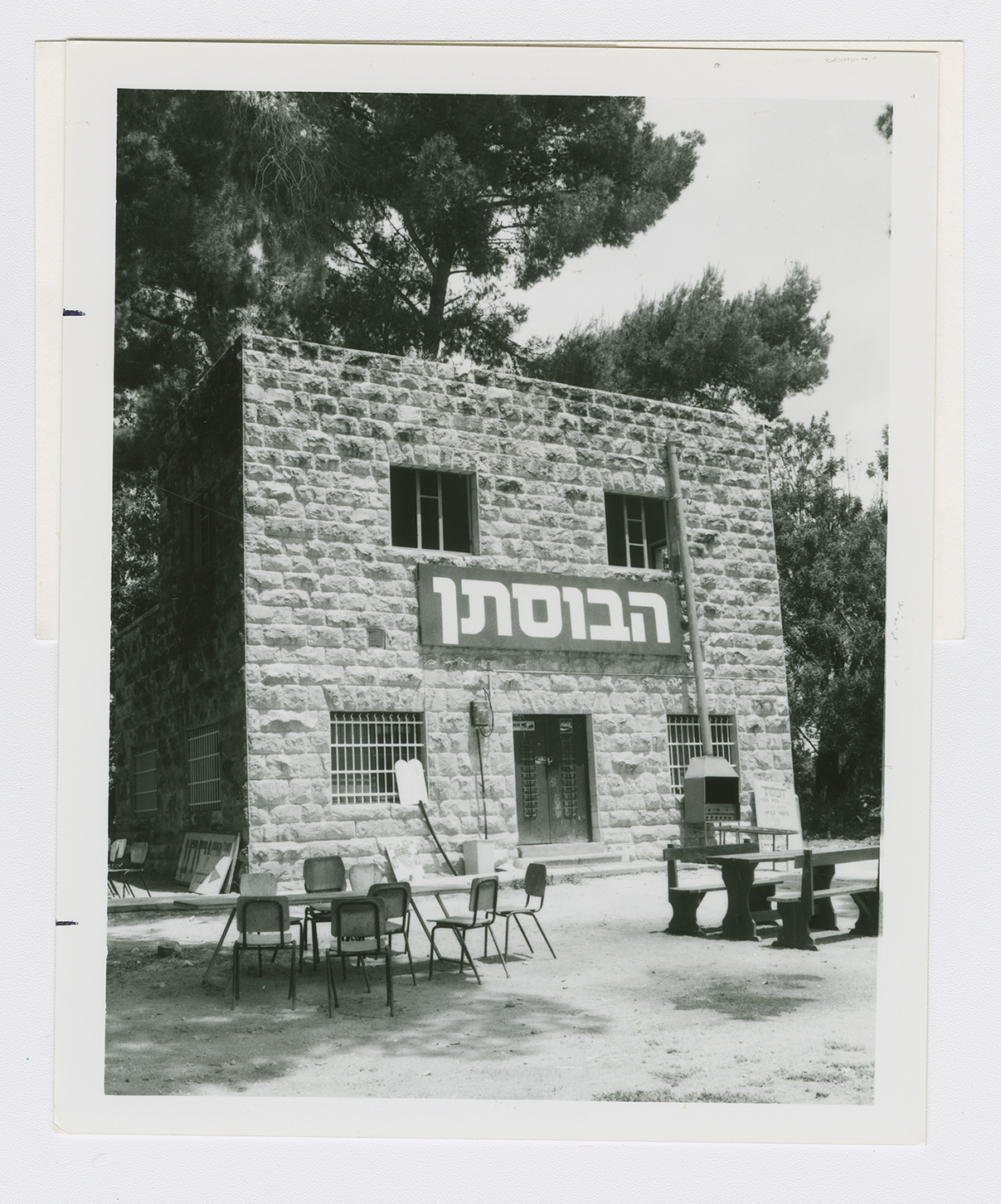 A village house now turned into a cafe. 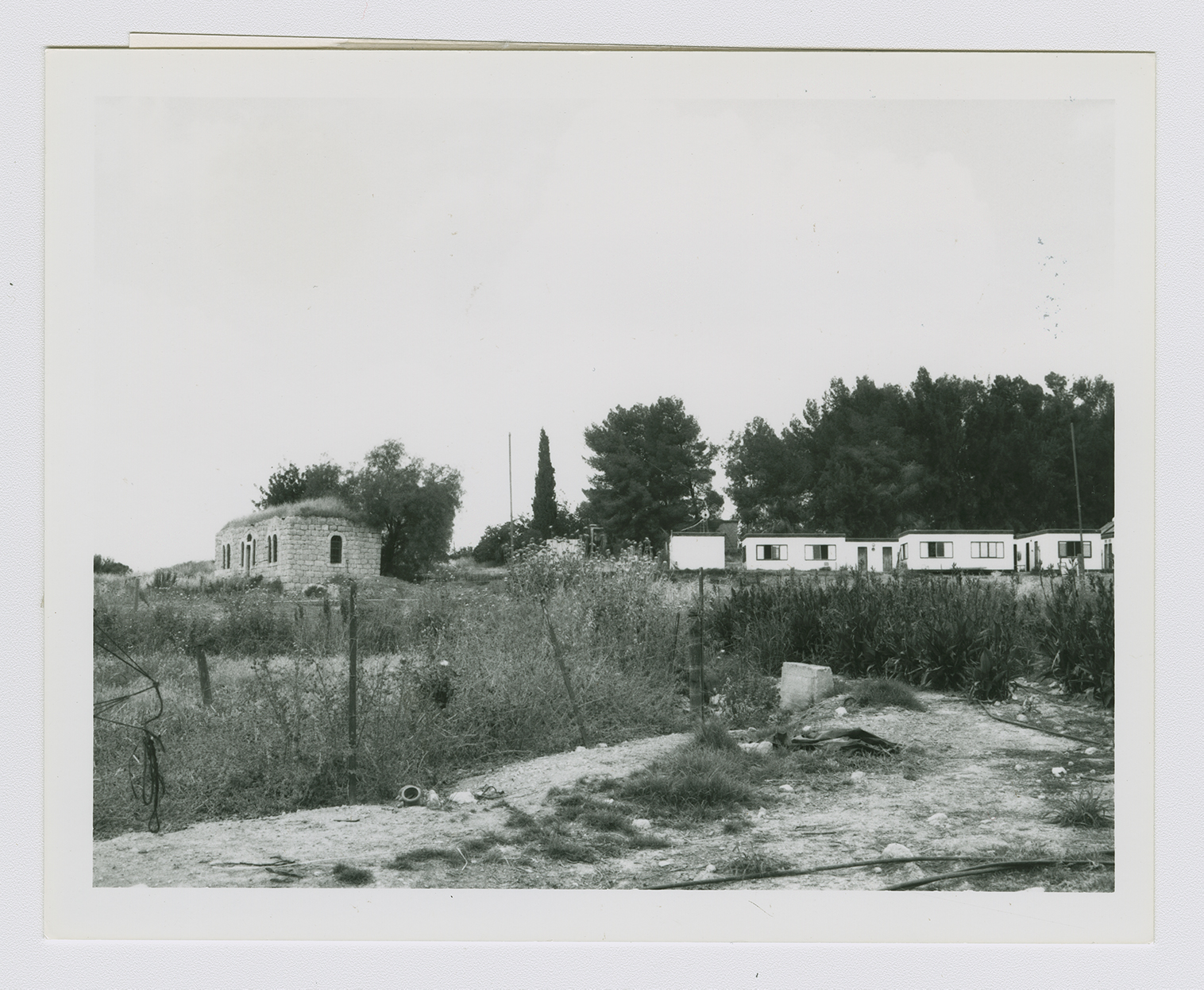