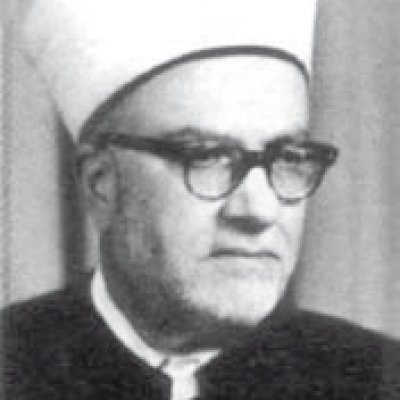 Abd al-Hamid al-Sayih was born in the city of Nablus to Abd al-Halim al-Sayih and Sabha Bakri. He and his wife, Fadliyya Bakri, had three sons (Qadri, Usama, and Bassam) and three daughters (Nawal, Na’ila, and Basima).

After completing his secondary school education in 1920, he travelled to Cairo as member of a group of young scholars chosen by Nablus notables and scholars to study at al-Azhar. There, he studied jurisprudence and Islamic sciences and in 1923 he received the Ahliyya diploma, followed in 1925 by the ‘Alimiyya. While studying at al-Azhar, he joined the School of Shari‘a judges attached to the Egyptian Ministry of Waqf and in 1927 obtained a certificate of specialization in Islamic Shari‘a.

Returning to Palestine in July 1927, he was appointed teacher of Arabic and Islamic religion at the Najah College in Nablus in 1928–29, where he became very friendly with the poet Ibrahim Tuqan and his cousin Qadri Tuqan.

Following the al-Buraq Disturbances in 1929, he took part in forming a secret society in Nablus to alert people to the dangers of Zionist ambitions in Palestine and to encourage them to fight British imperialism. He was also a member of the conference held in Nablus in early August 1931 to protest the arming of Jewish colonists. When the Arab Independence Party was founded (August 1932,) he became a supporter and delivered speeches at its meetings but never officially joined the party. In October 1932, he participated in founding the Society of Muslim Youth in Nablus.

Al-Sayih had good relations with Haj Amin al-Husseini, head of the Supreme Moslem Council, and he was invited in 1930 to be chief of the registrars of the Shari‘a Court in Nablus; in 1935 he was appointed a judge of that court.

Following the General Strike of April 1936 and the formation of national committees in Palestinian cities, the Nablus national committee chose al-Sayih to head the fundraising subcommittee. In September 1937, the British authorities arrested him and held him for nine months at the Acre Farm camp. Upon his release, the British exiled him to the town of al-Bireh where he spent a whole year.

Al-Sayih was chosen to be a member in the first Palestinian national council held in Jerusalem in late May 1964, at which the PLO was established.

After Israel’s occupation of the West Bank, including Jerusalem, in June 1967, al-Sayih and other notables from occupied Jerusalem formed the Higher Islamic Council of Jerusalem, which delegated him to serve as Chief Judge of the West Bank and delegated the Shari‘a Appeals Court in Jerusalem to assume the functions of the Waqf Council and the al-Aqsa Mosque Rehabilitation Committee.

For his role in leading the opposition to Israeli occupation and calling on people through speeches and lectures delivered at the al-Aqsa Mosque to resist that occupation, the occupation authorities expelled him to Jordan on 23 September 1967. He thus became the first Palestinian to be exiled by Israel from the Palestinian lands occupied in 1967.

Al-Sayih was twice Minister of Waqf and Islamic Sanctuaries in the Jordanian government (7 October 1967–26 December 1968 and 27 June 1970–mid-September 1970). He was also appointed Chief Judge and lectured at the Shari‘a Faculty at Jordan University.

Al-Sayih played a major role in convening the large conference held in Amman on 21 February 1968, from which issued a permanent Committee to Save Jerusalem.

King Hussein chose him to be one of the founders of The Royal Academy for Islamic Civilization Research (Aal al-Bayt Foundation), which was officially inaugurated in Amman in 1980.

Al-Sayih was elected President of the Palestine National Council to succeed Khalid al-Fahum at its seventeenth session held in Amman in November 1984. He remained in that position until he resigned and quit political activities in 1993, due to old age and illness. He remained in seclusion in Amman, far from the limelight and from politics. He died in Amman and was buried, according to his will, in Jerusalem.

Al-Shaykh Abd al-Hamid al-Sayih was a Palestinian patriot and militant who took part in all stages of the Palestinian national struggle and devoted his life to support the rights of the Palestinians and protect the city of Jerusalem. He had a penetrating mind and firm principles and was known for his high moral standards, his fine manners, his humility, and his moderation. He gained the respect of both Palestinians and Jordanians and was known as the “Red Shaykh” because of his progressive views. He was awarded the Nahda medal, first class, by Jordan in September 1967, and the Intellectual Achievement Medal, first class, from Morocco in January 1968. In 2013, the head of the Palestinian Authority, Mahmoud Abbas, awarded him the Medal of the Star of Honor, first class, in appreciation of his nationalist role.

[Principles of the Islamic Religion]

[The Way of Islam]

[The Status of Jerusalem in Islam]

[The Palestinian Intifada: Its Future and Role in Liberation]

[What Is to Follow the Burning of al-Aqsa Mosque?]

[Palestine: No Prayers under the Bayonets: The Memoirs of Shaykh Abd al-Hamid al-Sayih]