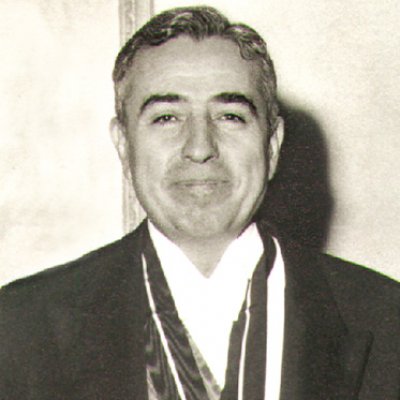 Anwar Nuseibeh was born in Jerusalem. His father was Zaki Nuseibeh and his mother was Fatouma (Fatima) Jawdet al-Nashashibi. He had six brothers—Hassan, Hazem, Mohammed, Hisham, Ahmed, and Mahmoud—and three sisters—Samah, Hala, and Zabbaa'. He and his wife, Nuzha al-Ghossein, had two sons, Zaki and Sari.

He attended Cambridge University in the United Kingdom, where he studied law and graduated in 1934.

After graduation he returned to Palestine. The British Mandate government appointed him as judge, first in Ramallah, and then in Nazareth, Jenin, and other towns in Palestine.

In 1945 Nuseibeh joined the Arab Bureau in London, founded with Arab support by Musa Alami, Palestine’s representative at the Arab League, to present Palestine’s case to international public opinion.

He went back to Jerusalem in 1946 and practiced law. He was well-known for his defense of Palestinian fighters in British military courts.

When the UN partition resolution passed in November 1947 and Zionist forces began their attempts to take over the city of Jerusalem, Nuseibeh was elected secretary general of the National Committee in Jerusalem, which assumed responsibility for defending the city, as similar committees did in other Palestinian cities. After British rule wound down, the committee took on tasks such as issuing identity cards and gun licenses, regulating commerce, and preventing profiteering. It supervised the distribution of bread, kerosene, and other vital commodities. As the head of this committee, Nuseibeh made strenuous efforts in April-May 1948 to prevent Palestinians from moving out of Jerusalem in the face of attacks by Zionist forces. While performing his duty he was seriously injured in a battle at a Jewish settlement north of the city.

In October 1948 Nuseibeh was appointed secretary general of the All-Palestine Government led by Ahmad Hilmi Abd al-Baqi.  The government had been proclaimed by the Palestinian National Council, which convened in Gaza at the end of September 1948 under Haj Amin al-Husseini. But the government soon collapsed and Nuseibeh returned to Jerusalem. After the unification of Trans-Jordan and the West Bank, the Jordanian government appointed him as a member of a committee set up to standardize the laws in the two regions.

In 1951 Nuseibeh was appointed as Jordanian representative in the Jordanian–Israeli truce committee, which was part of the UN Truce Supervision Organization set up by the UN Security Council to supervision the various truces between Israel and its Arab neighbors after the 1948 war.

Nuseibeh was elected to the Jordanian parliament as a member representing Jerusalem in April 1950 in the first elections held after the unification of the west and east banks of the Jordan. He won a second term in parliament in the September 1951 elections.

In March 1953 Nuseibeh was appointed to the Jordanian Senate, but he resigned his seat when he won a seat in the lower house of parliament in the November 1954 elections.

In 1956, in conjunction with several prominent Jordanians from both the east and west banks of the Jordan, Nuseibeh helped to establish the Arab Constitutional Party, which was led by Prime Minister Tawfiq Abu al-Huda.

Nuseibeh served as governor of Jerusalem and guardian of Jerusalem's holy sites between 1962 and 1965.

In November 1963, Nuseibeh was again appointed to the Jordanian Senate, but he resigned in June 1965 to become Jordan’s ambassador to the United Kingdom, a post he held until 1967.

In 1964 Nuseibeh was a member of the committee chosen by Ahmad al-Shuqairi to coordinate the process of nominating delegates for the First Palestine National Council, which met in Jerusalem in 1964 and gave rise to the Palestine Liberation Organization.

After Jerusalem and the rest of the West Bank fell into the hands of Israeli forces in June 1967, Anwar Nuseibeh became a member of the Supreme Islamic Council set up by prominent religious and civil Jerusalemites to protect religious sites and religious endowments from Israeli encroachments.

In the late 1970s Nuseibeh assumed management of the Arab Jerusalem Electricity Company to prevent Israel taking control of it. He died in Jerusalem in 1986 and was buried there.

Anwar Nuseibeh was a zealous Palestinian patriot, high-minded and cultured. He served his country and his people, playing a prominent role in various important fields under three administrations—British, Jordanian, and Israeli. He helped to save his birthplace from Israeli occupation at the end of the British Mandate in May 1948 and tried to stand up to Israeli occupation for two decades after East Jerusalem fell to Israeli forces in June 1967.