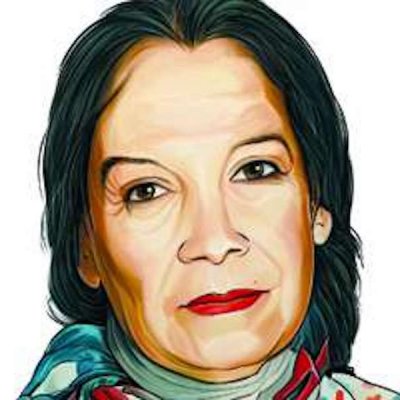 Fadwa Tuqan was born in Nablus. Her father was Abd al-Fattah Tuqan and her mother was Fawziyya Amin Asqalan. She had five brothers—Yusuf, Ibrahim, Ahmad, Rahmi, and Nimr—and two sisters, Fataya and Adiba.

She attended elementary school in Nablus at the Fatimiyya school and later at the Aishiyya. She had barely completed five years of study when she was removed from school under pressure from her brother Yusuf for “social reasons” and forced to stay at home.

She was greatly influenced by her brother Ibrahim. After he graduated from the American University of Beirut and returned to Palestine, he was determined to help her continue her education and to act as her guardian. She was able to escape to some extent from the harsh conditions of her home life when she decided to move to Jerusalem to live with him. She had contemplated suicide more than once, and the move to Jerusalem might have removed that thought from her mind for good.

Thanks to Ibrahim, who taught her to write poetry, a new phase of her life began. She started to become aware of her individuality, humanity, and right to education, and she took private lessons in English. She sent her poems to literary magazines in Cairo and Beirut, using pseudonyms. When they were published, her confidence in herself and her literary abilities increased.

After the deaths of her brother Ibrahim (in 1941) and her father, and then the Nakba of 1948, she began to take part, though from the sidelines, in the political life of the fifties. In 1956, she travelled to Stockholm as part of a Jordanian delegation to attend a peace conference organized by the World Peace Council, a trip that also took her to Holland, the Soviet Union, and the People’s Republic of China.

In 1956, she joined the Cultural Club established in Nablus by Walid Qamhawi and was an active member of it. This marked the beginning of her career as a poet. Through the club she met Kamal Nasir, a poet and member of the Jordanian parliament, as well as the poet Abd al-Karim al-Karmi (Abu Salma). She also met some leaders of the nationalist movement in Jordan such as Abd al-Rahman Shuqair, whom she hid in her house when he was pursued by the Jordanian authorities and helped escape to Syria in 1957.

In the early sixties, Fadwa left for England and lived for two years in Oxford, where she studied English language and literature. That trip left a deep impact on the development of her poetry and her personality.

When she returned to Nablus, she decided to remove herself from family and people and so built a house of her own to the west of the city. However, the disaster of 1967 drove her to once again take part in the public life of Nablus, now under occupation, and to commence a series of poetic and journalistic disputes with the Israeli occupier and its culture. That disaster transformed her poetry, moving it from personal and social subjects to poetry of resistance. Eventually her poetry became more comprehensive and human in theme, treating subjects like life and death, love, nature, family, and societal repression.

Tuqan was uniquely open and bold in her confessions as shown in her two-volume autobiography, which dealt with her private life and the social and political life of Nablus and the customs of its residents. She voiced her rejection of many of these customs, which in her view stifled the pursuit of knowledge and enlightenment so important to her. In that same work she dealt with her political and cultural activity, her resistance to occupation, and her contacts with Palestinian poets living in areas occupied in 1948.

Tuqan was elected to the Board of Trustees of al-Najah University when it was founded in Nablus in 1977. She wrote the university anthem and was granted an honorary doctorate by the university.

Tuqan, known as the “Poetess of Palestine,” is considered one of the most prominent cultural figures of Palestine. Between 1952 and 2000, she published eight collections of poetry. Selections of her poetry have been translated into English, French, German, Italian, Persian, and Hebrew. She was awarded a number of prizes and medals, including the annual Sulayman Arar poetry prize; the prize of the Union of Jordanian Writers in 1983; the Sultan Uways prize of the United Arab Emirates in 1989; the Jerusalem medal of the PLO in 1990; the prize of the World Festival of Contemporary Writing, Salerno, Italy, in 1992; the Tunisian cultural medal of 1996; and the PLO prize for literature in 1997. Several books and university theses have appeared about her and her work in a number of Arab and foreign universities, in addition to many articles and studies in Arab and foreign journals. The Palestinian novelist Liana Badr produced a documentary film about her life and poetry entitled “Fadwa: A Poetess from Palestine.”

Fadwa Tuqan died on 12 December 2003. She was almost 85 years old. Four years before her death she had suffered from a brain clot, which severely impaired her vision and her reading and writing. She was buried in Nablus.

Her death was announced by the Palestinian Authority to the world and to all who are concerned with culture, literature, and thought. The announcement ran as follows: “We announce the death of the great poetess of Palestine, an innovative and original talent, a daughter of Nablus, the mountain of fire; daughter of Palestine, educator, fighter for justice, cultural icon, exceptional literary figure, winner of the Palestine medal: the poetess Fadwa Tuqan.”

Some of her poetry was translated into English, German, French, Italian, Persian, and Hebrew.

[A Mountainous Journey, a Difficult Journey: An Autobiography]

[The Most Difficult Journey: An Autobiography]