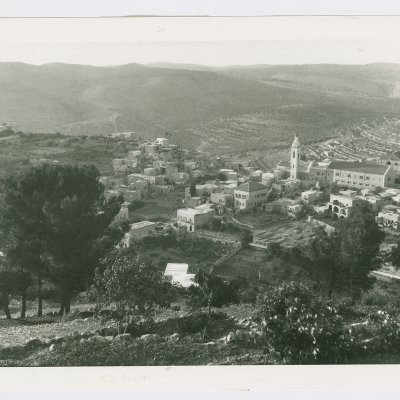 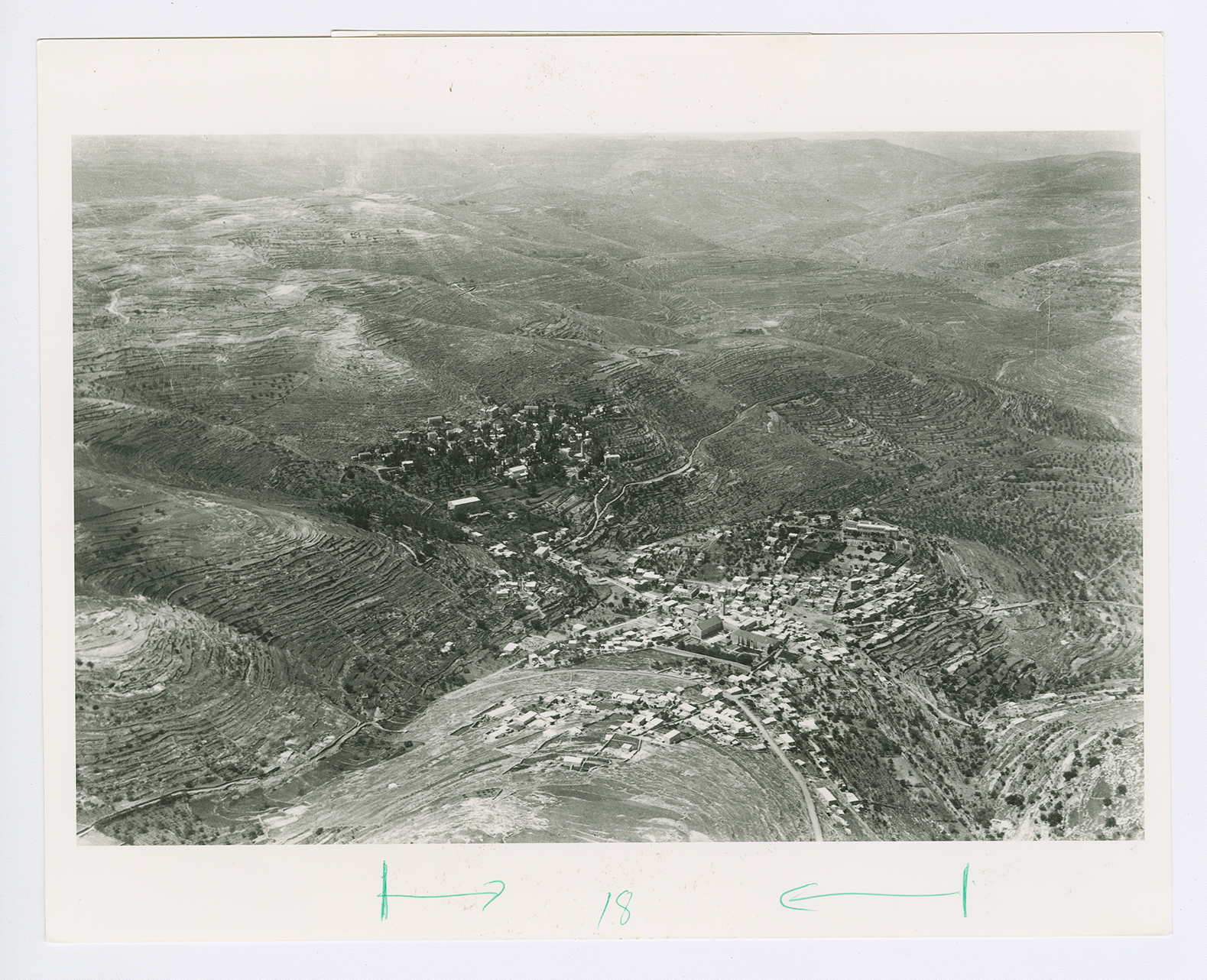 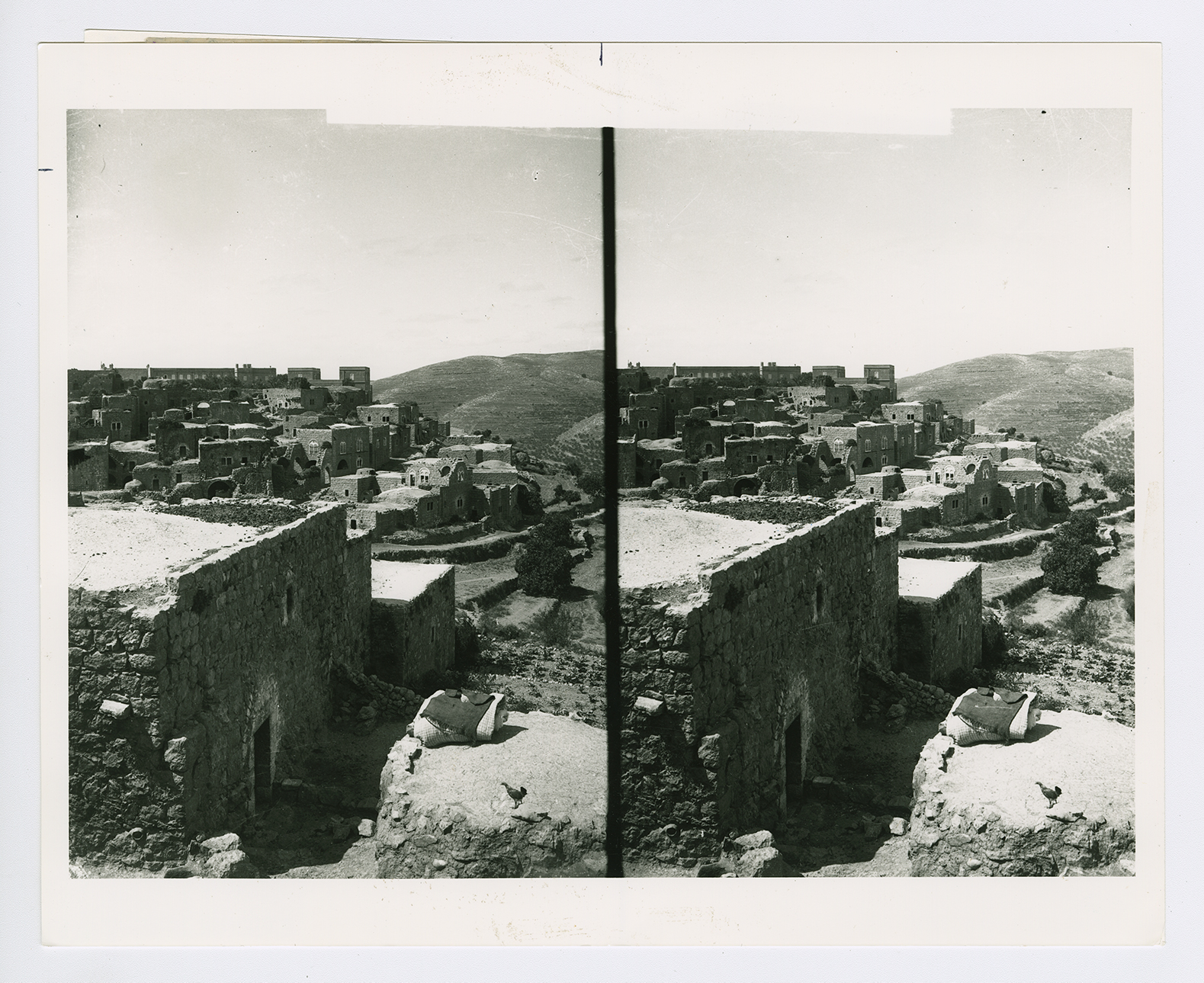 The village was divided into a terraced upper section and a lower section that lay in a valley, below and west of the upper section. The terrace projected from hills that rose above the site to the east. Below the site to the west was a broad, flat valley; the hills themselves faced west (see photos). The westward-flowing Wadi Ahmad crossed the village and irrigated the olive orchards in the village's northern lands. 'Ayn Karim was considered a suburb of Jerusalem and was linked by a paved road to the Jerusalem−Jaffa highway, which passed 3 km to the north of it. Archaeological evidence indicates that the village site was occupied as early as the second millenium B.C. Tradition identifies 'Ayn Karim as the birthplace of John the Baptist, and it is also said that Christ and the Virgin Mary visited 'Ayn Karim several times. It is believed that the third caliph, 'Umar ibn al-Khattab, passed by the village and held prayers in it at some time during the Islamic conquest. During the Crusades the village was called St. Jehan de Bois. Ottoman records indicate that in 1596 'Ayn Karim was a village in the nahiya of Jerusalem (liwa' of Jerusalem) and had a population of 160. It paid taxes on a number of crops, including wheat and barley, as well as on other types of produce and property, such as goats, beehives, molasses, and vineyards.

In the early nineteenth century the British traveler James Buckingham reported that there were Christians in this small village, and that the valleys in its vicinity abounded with olive trees.

Later in that century, travelers noted the presence of the Franciscan Church of St. John, which was housed in a convent to the east.

Another convent (for the Sisters of Zion) and a recently built chapel flanked the village on the west and south. The Survey of Western Palestine notes that, further to the west, a Russian hospice was under construction in 1882, that the Franciscans had established a school for boys, and that the Sisters of Zion ran a school and an orphanage for girls.

At the turn of the century, several people who were born in the village went on to achieve positions of prominence, including Shaykh 'Isa Mannun, who at one point was dean of the College of Islamic Foundations at al-Azhar University in Egypt. 'Ayn Karim is said to have been the secret operations center for the forces of the well-known Palestinian leader 'Abd al-Qadir al-Husayni from 1936 to 1939.

'Ayn Karim was the largest village in the Jerusalem sub-disctrict, both in area and population. Its houses were built of limestone and chalk and with typically arched frames over their doors and windows. Of the estimated 3,180 people who lived in 'Ayn Karim in 1945, 2,510 were Muslims and 670 were Christians. The population was made up of five clans or ; each had a courtyard where members of the hamula and their guests gathered to socialize and celebrate special occasions.

Drinking water was supplied by a number of springs. The village had two elementary schools (one for boys and another for girls), a bookstore, and a pharmacy. It also had several athletic and social clubs, including a boy scouts organization.

The villagers attended theatrical performances, including plays by the Palestinian artist and singer Nuh Ibrahim, who had been exiled to 'Ayn Karim from his hometown in northern Palestine because he had been active in the struggle against the British Mandate. Other sources of entertainment and information in the village included an open air movie theater and a radio in the village cafe, which was hooked up to loudspeakers so that large numbers of people could listen to it. ['Atiyya, forthcoming]"

'Ayn Karim had a local council which ran its administrative affairs. Although the village was situated in a mountainous area, there were some flat lands to the north (especially in an area called al-Marj), where vegetables and fruit trees were planted. The villagers built terraces on the slopes in order to maximize agricultural production. Olive and fruit trees and vineyards were planted on the mountain slopes. In 1944 a total of 1,175 dunums was allocated to cereals; 7,953 dunums were irrigated or used for orchards. In addition to agriculture, the people of 'Ayn Karim engaged in handicrafts and a few small-scale industries; for example, the village had a plant for bottling mineral water.

There were several monasteries and churches, the most prominent among them the Church of John the Baptist (also called the Church of St. Johanna) which is said to be built on the grotto where he was born. Other Christian institutions included the Franciscan monastery, the Church of the Visitation, the Convent of Saint Zecharia, and the Church of the Lady of Sahyun and her tombs. There was also a mosque, named after 'Umar, the second Muslim caliph, with a minaret near 'Ayn Maryam.

'Ayn Karim was encircled by a military unit whose members were drawn from a variety of forces, including the Irgun Zvai Leumi, Gadna (Haganah Youth Battalions) and the Home Guard. This occurred during the Ten Days between the two truces of the war (9−18 July 1948), when the Israelis strove to consolidate their position southwest of Jerusalem. The History of the War of Independence states that the village was first bombarded from two nearby hilltops that overlook it, one of which was later named Mount Herzl. But while Israeli historian Benny Morris claims that its residents 'abandoned' the village on 11 July, the Haganah account indicates. that it fell around a week later. An Israeli spokesman announced on 13 July that their forces had occupied 'Ayn Karim, but a later New York Times report indicated that the village was occupied the following week, during the morning of 18 July. The Israeli commander of the Jerusalem area was quoted on 22 July as saying that the 'crusader's fortress of Ein Karim' was captured between the truces. Arab officials charged that the attack on 'Ayn Karim was a violation of the Jerusalem truce, but the Israeli army reportedly reached agreement with the Truce Commission that the village was not covered by the special ceasefire for the Holy City.

The attack on 'Ayn Karim started at 2:00 a.m. on 18 July, when the Israelis stormed the height of Jabal Rab overlooking 'Ayn Karim. At 9:00 a.m., the village fell 'without a struggle,' according to the New York Times correspondent, who proceeds to tell us that the Arab Legion and Egyptian army stationed there offered only 'feeble resistance.' But it is most unlikely that units of either army (let alone both) would have been in the village at this time. The correspondent, however, implied that the inhabitants of the village, 'the traditional birthplace of John the Baptist,' had left earlier and only a few shots were fired at a lone Arab 'soldier' as he fled. Morris states that some villagers had already fled 'Ayn Karim in April, following the massacre at Deir Yasin (Jerusalem sub-disctrict), which is located 2.5 km to the northeast.

Mass movement of Jewish immigrants to Jerusalem began at the end of December 1948. Some 150 families settled in 'Ayn Karim, which was made a part of municipal Israeli West Jerusalem.

'Ayn Karim was one of the very few villages to survive its depopulation with its buildings intact. The others were Tarbikha (Acre sub-disctrict); 'Ayn Hawd, Balad al-Shaykh, and al-Tira (Haifa sub-disctrict); al-Safiriyya (Jaffa sub-disctrict); and Deir Yasin and al-Maliha (Jerusalem sub-disctrict). The village houses are inhabited by Jewish families. One Christian Arab family, exiled from the village of Iqrit (Acre sub-disctrict) in 1949, lives in the village, in an old school building attached to the Franciscan monastery. Some of the larger houses are beautiful limestone buildings two or three storeys high with arched windows and doors recessed into a larger arched facade (see photos). Some doors open onto balconies with metal railings. There are seven Christian churches and monasteries in the village. There is also a Christian cemetery beside the Russian monastery; a Muslim cemetery in the center of the village, covered with refuse and dirt, contains a prominent tomb with a large structure. The village mosque, in a state of disrepair, still stands with its minaret. The spring of 'Ayn Maryam flows out of the mosque courtyard. An Israeli hospital, Hadassa, has been built on the village site. Israeli tourist facilities with hotels and swimming pools have been built northeast of the village. 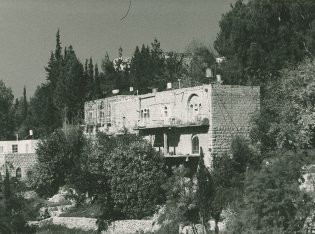 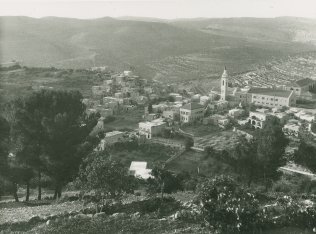 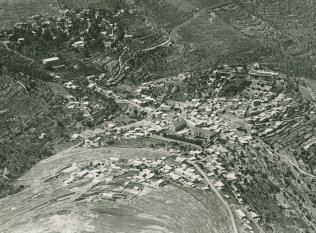 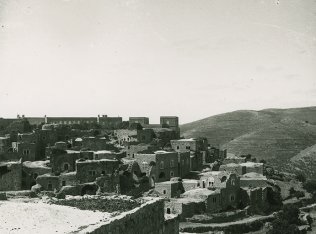 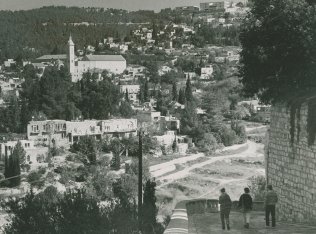 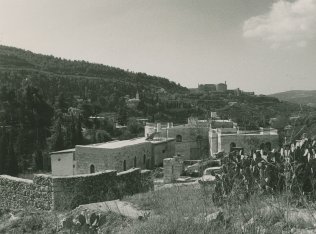 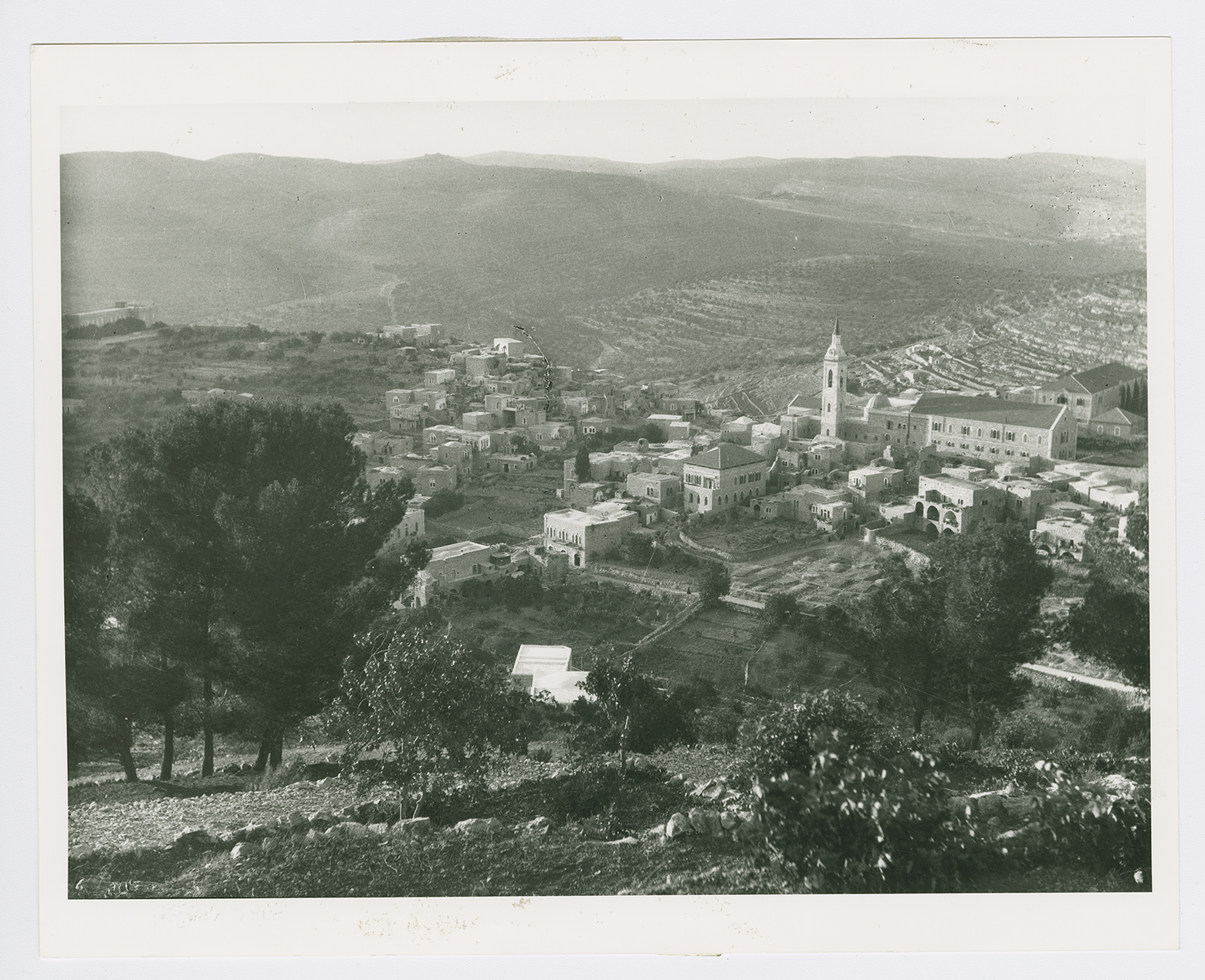 A general view of Ayn Karim showing the old and new quarters.

An aerial view of Ayn Karim. 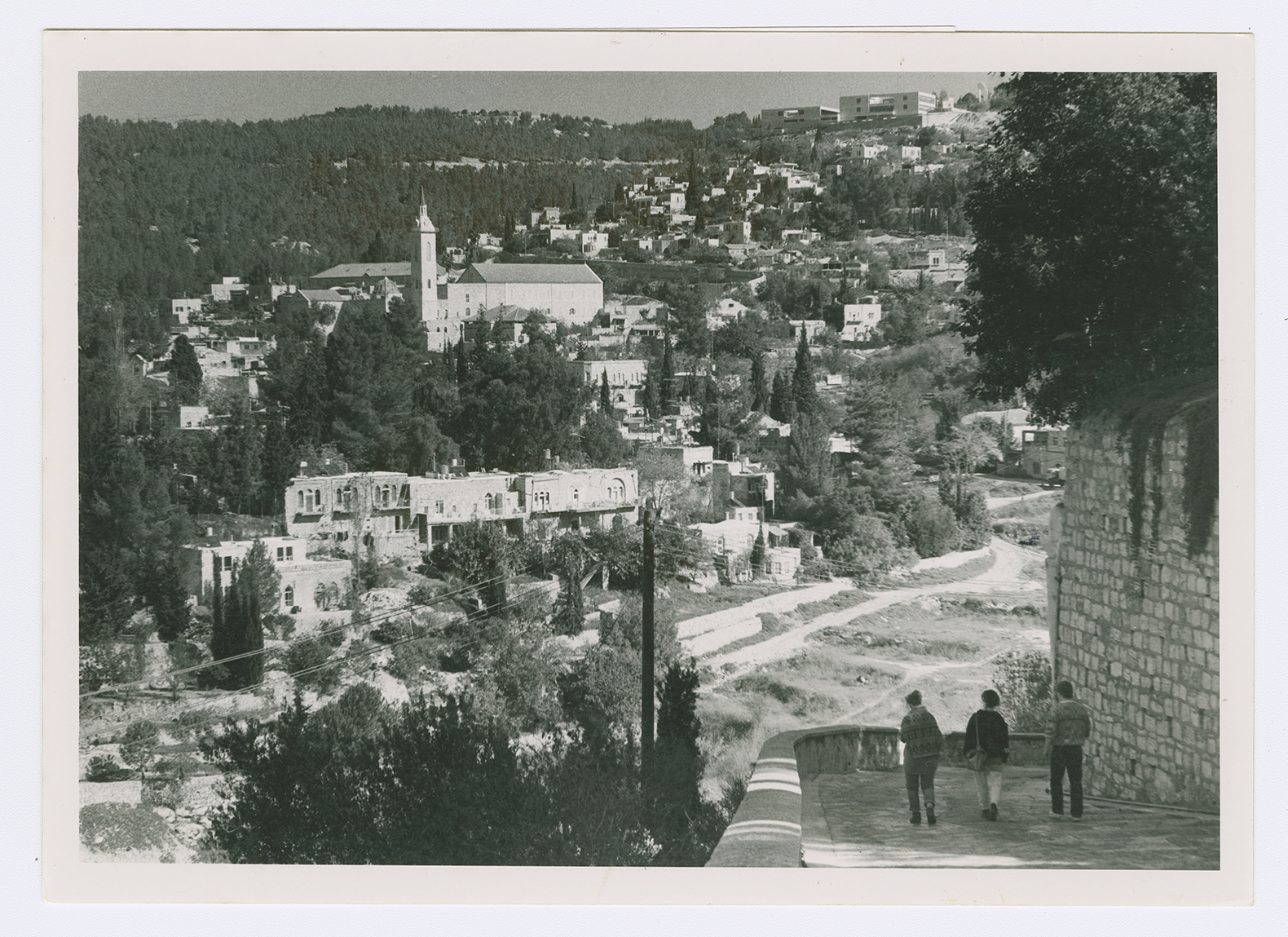 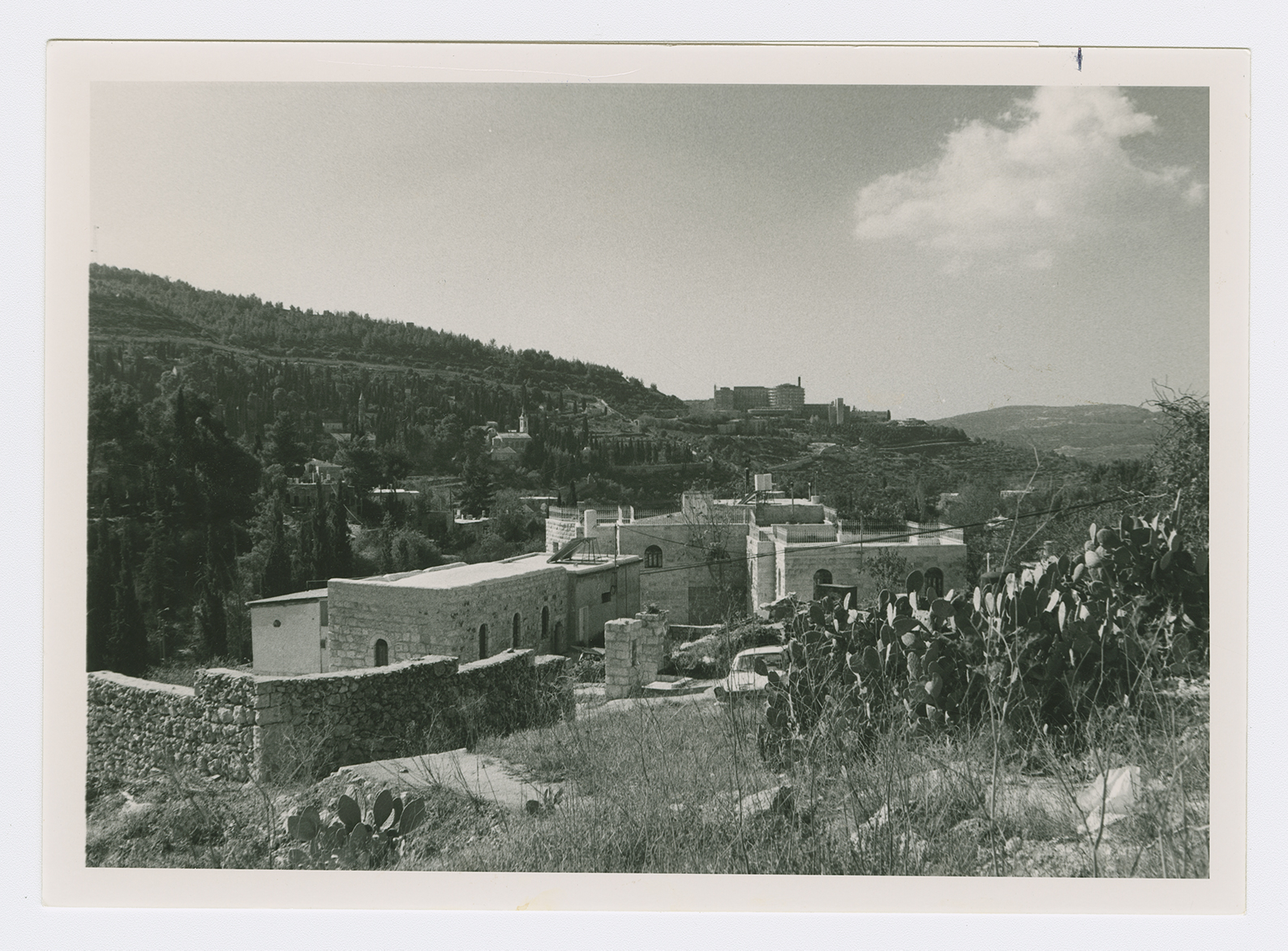 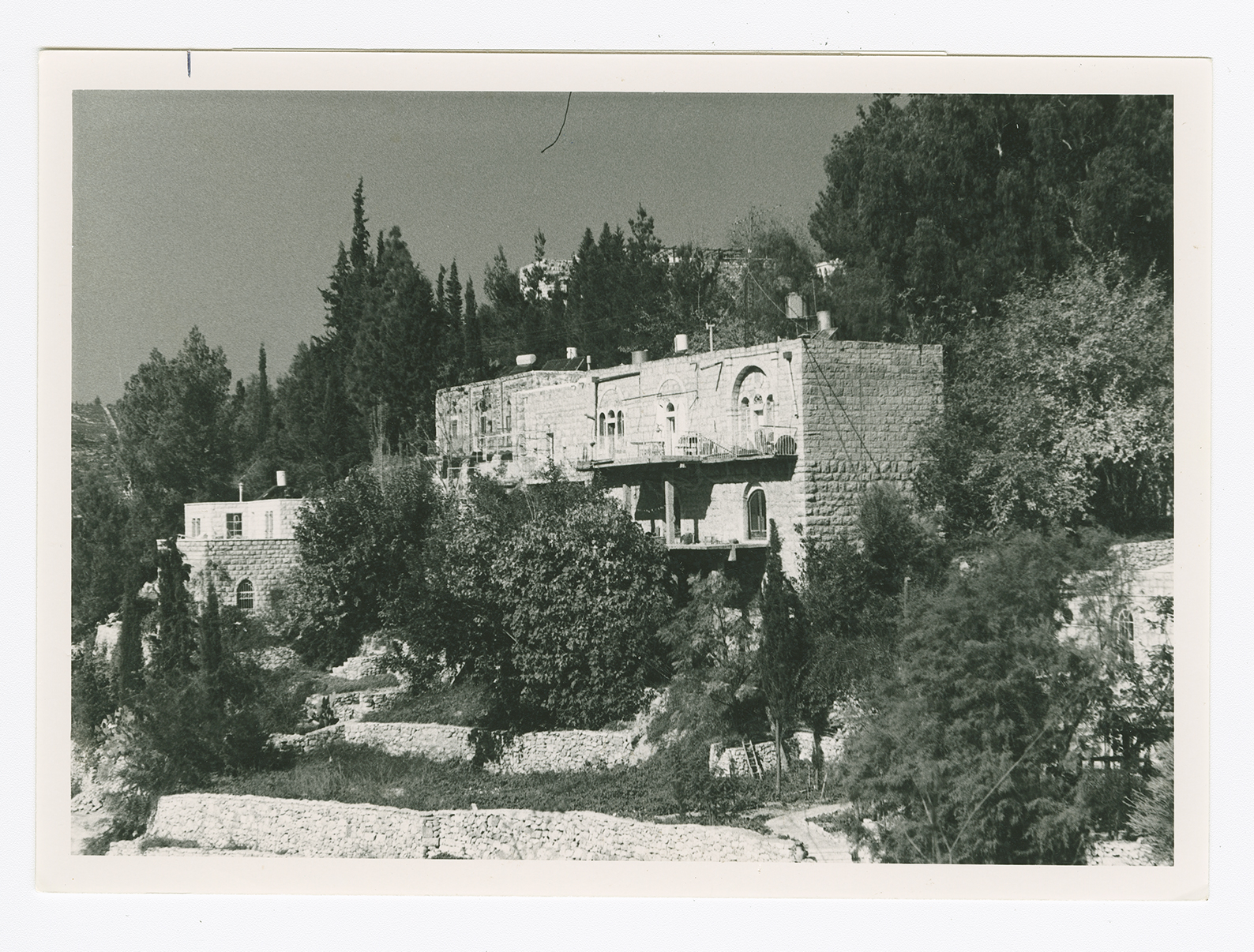