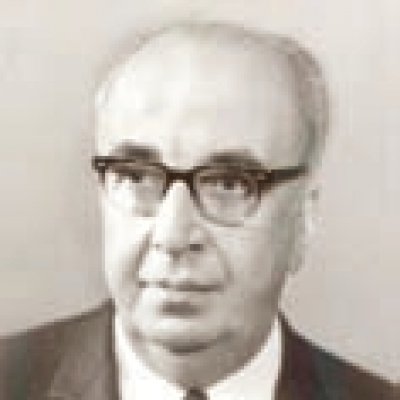 Fuad Saleh Saba was born in the town of Shafa Amr in Palestine. His father was the Reverend Salih Saba; his mother was Louisa Meyer. He and his wife, Muhiba Khattar Ma‘luf, had two sons, Suhail and Fawzi, and one daughter, Nadia.

Saba was educated at the Orthodox School, the Maronite School, and the Frères Secondary School in Haifa and then at St. George’s School in Jerusalem.

In 1921 he enrolled in the American University of Beirut where he graduated with a BA degree in Commerce in 1924. The title of his graduation thesis was “The Necessary Reconstruction in Palestinian Trade.”

In 1924, he went to England to specialize in accountancy and then returned to Jerusalem where he was appointed a teacher at the Catholic Terra Sancta College and was an official in the Young Men’s Christian Association.

In 1926, Saba obtained a license from the Palestine government as a chartered accountant and founded a Chartered Accountancy office. He then founded Saba & Company, the first Arab chartered accountants’ company in the entire Middle East, along with his brother Aziz Saleh Saba. He also supported the plan to establish the Arab Bank in 1930.

Fuad Saba took part in the first Palestinian Arab Youth Congress held in Jaffa on 4 January 1932, attended by two hundred participants. The conference adopted a scheme to establish a national fund. Saba was elected general accountant and member of the executive committee that ensued from that conference. The fund itself was established in September 1932 and was headed by Ahmad Hilmi Abd al-Baqi. It was to become the nucleus of a company established under the name The Arab Company to Save the Lands of Palestine.

Before the outbreak of the general strike and the revolt, Saba founded the Arab Publication Company in Jerusalem, which published two journals devoted to Arab economic affairs and which he edited: Arab Economic Affairs (1935–36) and Palestine and Transjordan (in English; 1936–37). He also founded the Arab News Agency.

As a representative of the Arab Higher Committee, he appeared in 1937 as a witness before the British Royal Commission headed by Lord Peel. Following the publication of the Peel Commission’s Report, Saba took part in drafting a memorandum to the British Secretary for the Colonies and to the chairman of the Permanent Mandates Commission in Geneva, declaring the Arab Higher Committee’s rejection of the recommendations of the Peel Commission, chief of which was the scheme to partition Palestine.

Saba took part in the Arab national congress held in the Syrian town of Bludan on 8–9 September 1937, attended by some 450 delegates from the Arab countries. That conference issued a number of resolutions in support of Palestinian demands calling for the rejection of partition, an end to the British Mandate, the annulment of the Balfour Declaration, an end to Jewish immigration, and prohibition of the sale of land to Jews.

When Awni Abd al-Hadi was arrested, the Arab Higher Committee appointed Fuad Saba as its general secretary. Lewis Andrews, British District Commissioner for Galilee, was assassinated in Nazareth in September 1937, and Saba was arrested on 1 October 1937 along with other colleagues who were members of that committee; they were deported to the island of Seychelles in the Indian Ocean and detained there for fifteen months. They were released at the end of 1938 but Saba was not allowed to return to Palestine until 1939.

Saba was chosen to be a member of the Palestinian delegation to the London Round Table Conference, which began its deliberations on 7 February 1939.

Returning to Jerusalem, Saba resumed his work at his accountancy firm and founded a company called al-Mashriq, an investment firm to encourage the affluent to invest their savings. He also founded the Arabian Insurance Company. In 1947, he published Income Tax and Its Problems in Palestine.

Following the Nakba of 1948, he was forced to move the headquarters of Saba & Company to Amman for a short period and then to Beirut. He thereafter established branches of the company in several Arab countries.

Given his line of work, Saba was a member of several international associations and institutes devoted to chartered accountancy, taxation, commercial trademarks, and patents.

Fuad Saba was the first Palestinian to hold a license to practice chartered accountancy under the British Mandate. He was a calm, methodical, and hard-working man, balanced in his thinking, and a true patriot. He was a pioneer in his line of work in the Arab world and among the leaders in commercial activity in Mandate Palestine.

He died in Beirut and was buried there.

[Income Tax and Its Issues in Palestine]